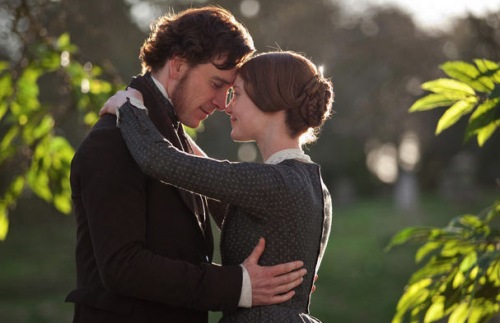 There have been many silver-screen versions with the most recent 1996 pairing William Hurt and Charlotte Gainsbourg all the way back to Robert Stevenson's famous 1944 one with stalwarts in Orson Welles and Joan Fontaine.

In the early passages, Jane (initially played by Amelia Clarkson) undergoes much discomfort at her Gateshead residence at the expense of her aunt, Mrs. Reed (the versatile Sally Hawkins of Made In Dagenham and Never Let Me Go).

Remanded to the Lowood charity school, there is some education besides more mistreatment as Jane develops an important friendship with a meek Helen Burns (done with feeling by Freya Parks). Unhappily, a sudden dire turn of events will prove to have a deterministic upside as Wasikowska's deglamorized Jane winds up at Thornfield Hall, a stately, remote estate, toiling as a governess for its gentlemanly master, Fassbender's Edward Rochester. And, there, she is shown compassion by the housekeeper Mrs. Fairfax, a decent Dench will less of her usual, welcome dry humor.

The imperious, moody, if darkly inward and aloof Rochester becomes fascinated by Jane, and a gothic, romantic feel unfolds as the former begins to open up quite a bit. Some, in particular may like the eeriness of a vast place which may be reminiscent of the better moments of a more recent film like The Skeleton Key. As someone of Jane's position (like Kate Hudson's caretaker in a "hoo-doo" bayou) is expected to be, both have a hardy, curiosity which has haunting ramifications, but crucial to realizing what lies ahead for two damaged souls.

Part of the estimable backup, Bell (also good in another period piece opposite Channing Tatum, The Eagle) is fine as cleric St. John Rivers who offers asylum for a shaken Jane at his Moor House and provides the impetus to make the best choice that involves Thornfield.

The decision for Fukunaga (who impressively helmed a harrowing, poignant Sin Nombre) to direct may initially seem rather odd, as the source may be stripped or modestly pared down too much on a melodramatic and visual level.

However, it widens the exposure of Fassbender who may be recognized from his lieutenant in Inglourious Basterds as his Rochester is more of a character than when first met. The casting of him with an adroitly sensitive Wasikowska (who has impressed in Tim Burton's Alice In Wonderland and The Kids Are All Right) who burrows through bewilderment with winning pro to-feminism of such a venerable, demanding Bronte heroine ends up hitting some rather effective literary, emotional grace notes.