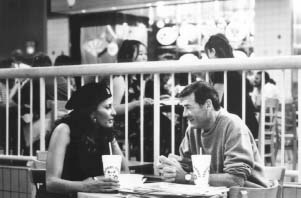 If Quentin Tarantino has film making skills, either I can't see them or they just aren't there.  It's like the King's new clothes - I don't think he has them, but many others do.  Jackie Brown is filled with more brainless murder and indulgence in drugs which Tarantino portrays as commonplace, leading many into believing hs is avant garde when he's ripping them off and laughing all the way to the bank.

Jackie Brown (Pam Grier), a small-time flight attendant, has been carrying money from Mexico for Ordell Robbie (Samuel L. Jackson).  When it goes wrong she has a choice of testifying against him or going to jail.  She knows he plans to kill her to get her out of the way, so she concocts a twisted plan with bail bondsman Max Cherry (Robert Forster) to grab the money and get away from Ordell.  Melanie (Bridget Fonda) and Louis Gara (Robert DeNiro) are the henchmen of Ordell who are part of the transfer of money which is supposed to happen but which Jackie Brown foils, grabbing the money for herself.

Forster turns in the finest performance in the film.  He is an aging bondsman who has seen too much over the years but finds himself caring a great deal about Jackie Brown.  His feelings are projected through caution with comes from experience.  Grier's performance is also interesting but Tarantino photographs her as frumpy, particularly when he catches her bending down with shots from the rear.

The switch and double-cross are interesting and Tarantino replays the switch from three points of view.  This could be interesting but the length of the film and the long scenes of Grier walking in airports and other locations along with dramatic pauses which drag on forever, render the tricky three views too long and boring.

The talented cast deserves better.  Only Grier and Forster have parts which highlight their skills.  The others drag along with the same foul mouth, ugly, anti society dregs that Tarantino appears to love.

It is rated R for violence and sexual situations.