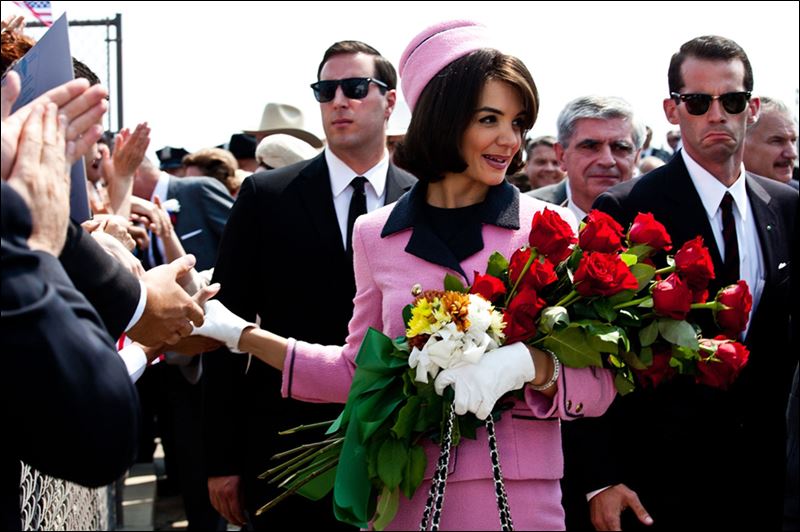 
A new, quite polished biographical drama from Pablo Larrain (No) is a biographical drama dressed up as a political period piece. More to the point, it is an oddly mesmerizing psychological examination around a national tragedy. One from a different perspective than Peter Landesman's Parkland which contextualized the turbulence around an assassination with the Oswald family hardly left on the sidelines.

Jackie looks at a fallen, yet defiant First Lady in an elliptical presentation that takes place before and after Jacqueline Kennedy's beloved Jack was shot to death in the Presidential motorcade on a November 1963 afternoon in Dallas.

The loss, crying, and stress is apparent in her visage at the outset exemplified by tenderness and distraction, as well as a scattered tense wreck. Chilling strings are prevalent in the eclectic score from Mica Levi (Under The Skin) to underscore the abrupt shifts felt by the harried, yet sassy protagonist endowed remarkably by Natalie Portman (arguably eclipsing her Oscar-winning turn in Darren Aronofsky's Black Swan).

Producer Aronofsky (who directed her in the darkly poignant and surreal film set in the competitive world of ballet) was instrumental in getting the once skeptical Chilean director aboard with Portman's extensive background work. One which truly pays major dividends in a vividly committed, nuanced effort, especially from much vocal coaching, as well as costume and hair design. As Larrain and Portman demonstrate, the First Lady and widow was more than a fashion plate. The lensing lets Stephane Fontaine highlight interiors (shot in Paris) and exteriors in Washington, D.C. to contribute in light and hues to ensure characterization and narrative richness.

Almost experimental, but expressionistic in form, there's sentient work from Noah Oppenheim's screenplay (as the writer had originally planned for the project to be in mini-series format) to deliver fragmented sequences. Bookended through an interview at Hyannis Port Massachusetts with The Journalist (well-educed by Billy Crudup and not identified as Theodore H. White) for Life magazine where a seething catty quality is observed, as when a plume of smoke is exhaled.

A shell-shocked Jackie often shot in close-up is on Air Force One as Lyndon Baines Johnson takes the emergency oath of office; a prescient poise comes out of the depths of woman grieving from her initial private time as a widow washing blood and a portion of her husband's remains from her hair. Asking aides of a funeral modeled after Abraham Lincoln while also showing off more debutante elegance in public when giving those iconic televised White House tours is on her agenda.

Of that fateful moment a grandiloquent sweeping depiction is felt with 16 mm footage inserted for the desired effect. It's complemented by Peter Sarsgaard's convincing projection of disappointment as a future Presidential hopeful, Bobby Kennedy, and, alas, victim. His vigorous dismay at the idea of what his brother could have accomplished if given the opportunity links to the resonant motifs offered from the overall pathos.

Caspar Phillipson has quite a likeness (especially in profile) as the perished Commander-In-Chief (in brief) who is there to give Jackie calamity and clarity. More time is given to Greta Gerwig as Jackie's assistant Nancy Tuckerman, Max Casella as Jack Valenti, John Carroll Lynch as new President Lyndon Baines Johnson, and Beth Grant as his pesky wife Lady Bird with tensions and anxiety manifesting another side of the First Lady. A plus also in a secondary role is John Hurt's helpful, if ambivalent Irish Catholic priest when it comes to the horribly despondent thoughts from a shattering experience.

When no else could, Mrs. Kennedy continued in her own resolute way what her husband began to confer the politics with a reputation and legacy that certifies Jackie in its way and demeanor around 'Camelot' and devastating heartbreak a singularly impactful genre example. Especially with a deceptively keen Larrain at the helm guiding a piquantly pitch-perfect Portman to another amazing portrait certainly guaranteeing her another round of high accolades this upcoming awards season.