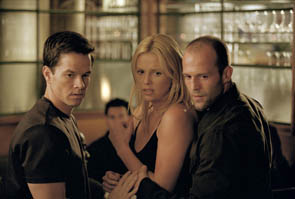 In this update of a 1969 British caper, Charlie Croker - played by Mark Wahlberg, a career criminal  heads a crew masterminding a massive gold bullion heist in Italy.  But the gang is double-crossed by one of their own, Steve (played by Edward Norton), who makes off with the loot.  With the help of a gorgeous if understated safecracker (Charlize Theron) whose father (Donald Sutherland) was killed in the double cross, the team plots payback.

Their plan is to steal Steve's gold, safe and all, while escaping by hacking into the stoplight system in Los Angeles creating the largest traffic jam in the city's history and allowing them to flee in their fleet of Mini Coopers.

This film is a great cross between the classic TV show "Mission Impossible" and the wonderful film The Sting plus you get to add into the great storyline the impressive cinematogrophy and fantastic scenery plus a chase scene in boats reminisent of the car chase in Ronin.  In short, if you like adventure and a creatively twisting plot youll know why I give The Italian Job a B+.