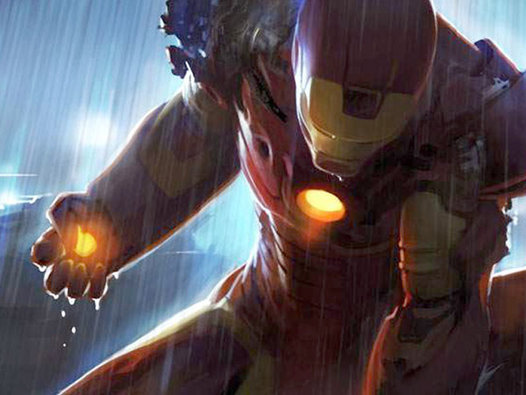 
A Marvel Comics superhero franchise generates more excitement (not just in some huge set-pieces like a midair plane rescue) in its third installment and even entertains after a lengthy closing credit scroll for some amusing couch time.

Director/co-writer Shane Black and Robert Downey, Jr. are back together in fine form after their 2005 self-consciously gregarious neo-noir Kiss Kiss Bang Bang in a crackling action blockbuster Iron Man 3 that isn't really diminished by the ever so common 3D format. The story picks up right after the cataclysmic events of the consistently proficient Marvel's The Avengers and ends up nearly rivaling the origin tale helmed by Jon Favreau (back as chauffeur Happy Hogan who gets injured in one of the film's most unnerving, timely 'Boston Strong' scenes).

While Black (a scenarist for The Last Boy Scout and Lethal Weapon) may not have the expertise or finesse as a director in the genre, he knows how to combat the grandiose spectacles into something personal with a human touch. Younger audiences will dig the advances in the suit of super rich military contractor Tony Stark (Downey, Jr.) but the key here is how the character is able to be invigorated outside of it.

Taking his mind off of his calling (with the government having their 'Iron Patriot') has brought on nightmares and panic attacks leading to troubles with partner/paramour Pepper Potts (Gwyneth Paltrow). The sinister, enigmatic multimedia manipulator (with roots from the comics) known as The Mandarin (Ben Kingsley) has the U.S. reeling from "a season of terror" taking on Tony's foolish challenge that leads to sudden relocation and rebuilding with the help of patriotic James "Rhodey" Rhodes (Don Cheadle). Also, Tony's old girlfriend Maya Hansen (Rebecca Hall) a savvy bio-scientist and rival genius scientist Aldrich Killian (Guy Pearce) with 'Extremis' ideas from a pre-millennium prologue turn up to bring more incendiary conflict to the table.

What Downey, Jr. does with Stark's ultra-cool snideness and smug cockiness even in taunting fashion is an effortless tour-de-force that lends itself to the high-tech jargon and wry banter before segueing into a nifty special f/x demonstration. A scene showing what occurs at a cliffside mansion is just one of the highlights, along with a climactic oil rig explosion.

The spry snappy line readings produced by Black and Drew Pearce and eye-popping gadgetry (holograms and command call armor suits as examples of the aforementioned to even possibly broaden its demographic) is a decent template that Downey and his costars latch onto. Stark/Iron Man's scenes with Paltrow (though an imperiled Pepper may be too limited and presented in square fashion) and Cheadle's fellow ironclad superhero 'War Machine' acerbically enliven and are more rooted in character, particular as the action pivots off of Tony's disquietude. An unexpectedly ally comes by way of a preteen, a convincing, but not precocious Ty Simpkins as Harley.

Pearce (working a fine attractive, venomous duality here) and a quirky Hall comfortably fit into the zillionaire/globe contractor's milieu and there are minions (James Badge Dale, Stephanie Szostak) under The Mandarin not of the garden-variety nature when it comes to certain techniques of preservation. It's the well-adorned Kingsley who provides an impudence to his scene-stealing significant role that mainstream audiences may easily favor over Javier Bardem's uncomfortably charismatic, less theatrical and vengeful Silva from the recent 007 foray Skyfall.

Iron Man 3 isn't afraid to be blithe or open up wounds in ways that retains the human element while not cranking up Power Rangers or Transformers bombast. A thrillingly fluid, lavishly mounted summer blockbuster is often keen to how a franchise can be refreshingly refitted (though it's uncertain about this being the swan-song) even if it's inexorably linked to more Marvel-ous conflicted heroes and their sagas.