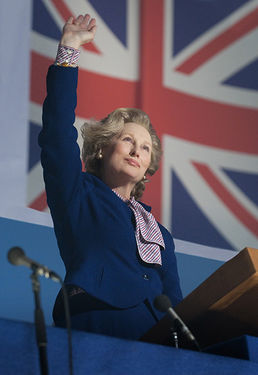 
A discordant biopic is still entertaining and reverent enough because of the deeply convincing performance by its iconic, versatile performer.

Meryl Streep is controversial Margaret Thatcher in The Iron Lady, working from the premise of an octogenarian selectively recalling her life from childhood to a noteworthy political career as England's first female Prime Minister who held the position for nearly a dozen years. The local media (and apparently those included in the film) aren't particularly happy with the result and perhaps the decision to have the accomplished Streep (and not a notable British thespian) to assume the role of such an authoritative figure.

Helmer Phyllida Law (who guided Streep to much commercial success in the musical film Mamma Mia) from a script by Abi Morgan (Shame) appears to emphasize certain parts of Thatcher that may not be insightful enough and a full-bodied representation of such a vibrant, unwavering leader.

Similar in some ways to J. Edgar (but shifting back and forth in time that may dilute the important of certain events), this yarn has Thatcher (Streep wearing the aging makeup better than most) afflicted with acute memory loss. Along the way of much technical grace into evoking a character with uncanny mimicry, a teenage Maggie (a fine Alexandra Roach) grows from a relationship with her Grantham grocer father.

From a muddled mind comes a slew of unevenly factual interspersed episodes like a miner's strike, issues with the Irish Republic Army, a Brighton bombing and the Fallands War, as some might be dismayed with little between a scoffing Thatcher and other key players of her time, particularly President Ronald Reagan. So, what is intended as a fair-minded representation really isn't all that interesting, especially considering a similar subject as more persuasively and coherently drawn, as The Queen (a lauded docudrama in which Helen Mirren did something remarkable in the titular role).

For what The Iron Lady lacks in the production and double-edged storytelling department (perhaps reminiscent of better portraitures like La Vie En Rose and Iris) there is some affecting, even lighter moments in reflecting on personal and professional triumph. Margaret is still coping with the loss of her sweet Denis, a convivial Jim Broadment of the aforementioned film with Judi Dench. Some of the oddly affecting passages as she collects his clothes include much conversation and even some dancing complements of Rodgers and Hammerstein's The King and I (Denis refers to Yul Brenner).

But, it's the tight control of Streep over the character that reigns over the unrefined, arguably cloudy presentation and narrative and consistently hold's one attention (just like she did in Julie & Julia). Her expression of detail  into the admirable, rather conventional tactic of Law and Morgan is staunch and tactile keeping the implacable woman who had more than her share of detractors a very British force of nature.