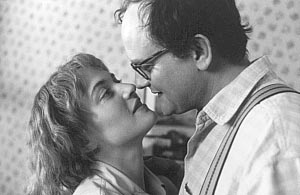 Richard Eyre's film revolves around the unconventional life of English writer Iris Murdoch and her husband John Bayley, whose memoirs are the substance of Iris.

For those who aren't familiar with Murdoch's life, it is depicted with a lean, unsentimental flavor as the great Dench (Mrs. Brown and The Shipping News) along with Winslet (Heavenly Creatures and Titanic) portray the woman who was afflicted with Alzheimer's disease late in life and succumbed to it in 1999.

Bayley is the professor/literary critic who wed Iris and nursed her in the end.  Broadbent and Hugh Bonneville make up the older and younger John.

Iris flashes forward and back from the 50's to the 90's as the muted, but often heartfelt story goes from tragic to flippant.  We even get to hear the Ink Spots during the uncommon courtship.  The actors prime this uneven, superficial tale, which considering the plotting rates higher than expected because of the expression of the characters played by Broadbent, Winslet, Dench and Bonneville.

Dench exceeds her work in The Shipping News and Broadbent etches sharply into a man who has to vent anger and frustration while his wandering wife can no longer be the person he has known throughout his adult life.  Now that she is his alone she doesn't know.

If younger adult audiences tap into Iris it probably will be largely due to the appeal of the youthful Murdochs as performed by Winslet and Bonneville.  She exudes a delightful bohemian spirit and he is a clumsy conservative.  They are an odd couple in love.

Part of the generosity Eyre imparts on Iris is the exquisite photography which goes hand in hand with the performances.  Yet, what may be discomforting for many is the adaptation of a bright, literate sexy woman who gradually dislocates from herself.  Perhaps more of the Murdoch's life stories could have been presented in a joyful film filled with all the energy and freedom of a renowned, yet finally helpless novelist.