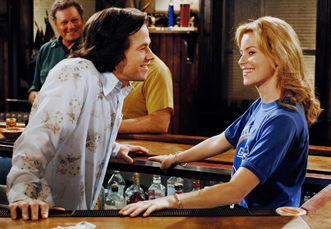 
Disney loves inspiring, true to life sports stories like The Rookie and Miracle. Invincible is another prime example.

The story of Vincent Papale, played by Mark Wahlberg, a lifelong football fan of the mid 70's Philadelphia Eagles. Invincible has the warm feeling of the comfy chair we watch NFL games in.

It is inspiring, after Papale's wife (Lola Glaudini) leaves him, he's fired from his teaching position and his cherished Eagles are abandoned by all but the diehard fans. Vinny takes a chance and attends an open tryout, the brain child of incoming coach Dick Vermeil (Greg Kinnear).

The event which draws wannabe's, drunks and armchair quarterbacks from the home town is not expected to do anything but create publicity. When Papale actually makes the cut, no one is more surprised than he is. In real life the thirty year-old played three years for the Eagles.

From that point, Invincible is short on football, re-creating only a few sequences of gridiron talent on Papale's part. Still, this a football epic with a heart that shows that beating the odds and sticking to your dreams no matter how absurd they may appear, can have rewards.