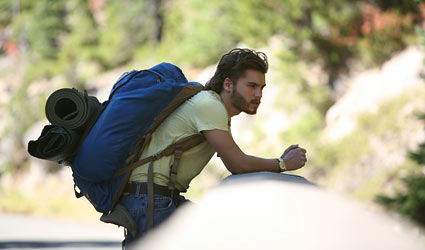 
Sean Penn finds joy and despair in the wilderness in the story of the vainly adventurous Christopher McCandless, a man searching for his inner Jack London.

His unchronological Into the Wild which he adapted from Jon Krakauer's riveting saga is a bit uneven, but accummulates dramatic power thanks to his casting of the bright young actor Emile Hirsch (Alpha Dog, Lords of Dogtown).

The evocative, sweeping picture has McCandless (back in 1990) turning from his parents wishes for law school (he gives to charity his intended law school money). Flashbacks indicate that he didn't look up to his parents as played by Marcia Gay Harden and William Hurt.

Upon graduation from Emory University, Christopher does all sorts of things before hitchhiking to Alaska. That includes using freight trains and kayaking, after leaving his car, keeping his loved ones in the dark as to his whereabouts as he gets by on menial work.

There's a sentiment of family value that Penn follows through when it comes to McCandless's understanding of what he left before changing his name to Alexander Supertramp. He'll spend nearly two years in North America before being stranded to his demise by a rising river.

The vagabond existence takes him almost into a foster home of sorts through the the openness, sharing, and caring of strangers, even as his travels and travails ultimately become more sadly evident. Very early on, his Alaskan arrival is marked by asylum in a remote abandoned bus. Much later, from the discovery of moose hunters, McCandless had reassumed his given name.

Penn works remarkably well with his lenser Rodrigo Prieto (21 Grams) to make Christopher's angst palatable on an emotional and visual level, with the latter lushly realized, especially in the later uncomfortable scenes.

There is also noticeable support from Kristen Stewart (In The Land of Women) as an enamored singing teen, Catherine Keener as a young middle-aged hippie who has issues with her own son, a funny, advising farmer done well by Vince Vaughn, and an aging military man, acted with mournful gusto by venerable stage and screen actor Hal Holbrook.

Into The Wild finds its way to a higher spiritual plane through all the title cards and diary entries thanks mostly to Hirsch's embodiment of a fraught, nearly indefatigable messianic individual who touched those he met.