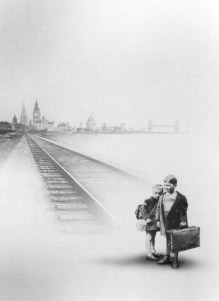 Into the Arms of Strangers

The uplifting and shattering documentary Into the Arms of Strangers makes a remarkable companion piece to the Award winning Holocaust documentary The Long Way Home which depicted the harsh conditions at home for Jews after the eradication of concentration camps.

The benefactors were some ten thousand Jewish youngsters from all over Eastern Europe who were brought to England via a special rescue operation the kids were put in hostels and foster homes.

Characters like Ursula Rosenfeld offer up childhood memories which are sad: her eighth birthday was without celebrants and soon her father was deported to Buchenwald.  Her mother and sister Hella transported to Britain without an idea if they would be able to see each other again.  Ursula never forgot that separation.

Lee Holdridge's music intersperses with Judi Dench's narration.  We get to meet the likes of Kurt Fuchel who was astonishment at seven as was removed from his family which he was reunited with nine years later.  Also the author of "Other People's Houses", Lore Segal gives another penetrating interview as a refugee child.

This riveting and heartbreaking documentary doesn't exclude those brave souls who aided the rescue.  Back in 1938 a 29 year old stockbroker named Nicholas Winton helped move 664 Czechoslovakian children to England.  Later that year a transport of 250 kids from Prague failed and they didn't survive.  The Kindertransport didn't save all from tragedy as Into the Arms of Strangers adds a heartfelt touch to lost children who continue to struggle into their golden years from the horrible memories over half a century ago.