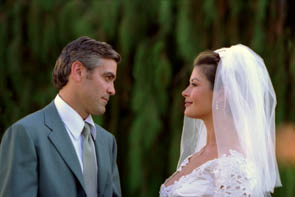 Two of today's best looking actors outrageously flirt and exchange quips, while they square off against one another.

Massey has met his match with Marylin, because not only is she gorgeous, she also can play dirty.  Massey's claim to fame is that he has authored a virtually unbreakable prenuptial agreement.

Massey shows up with his chemically whitened teeth, impeccable suits and makes mince meat of his opponents.  Marylin, however is up to the challenge.

Zeta-Jones' beauty and sex appeal is central to her character, and she plays it up for all it's worth.  She uses her charm to reel in her latest conquest, and Massey is both attracted to her physically and blown away by her ability to reduce wealthy, successful men to mush.

Billy Bob Thornton is funny as one of Marylin's many admirers.  He plays a Texas oil billionaire who is taken in by her and gladly pledges her his undying love along with his cash.

The witty repartee between the two stars is a lot of fun and will remind you of a smart 1940's comedy.

This delightful film relies heavily on the chemistry between Zeta-Jones and Clooney - fortunately they have enough to space.  Their performances elevate a little comedy into an enjoyable and entertaining film.