In the Valley of Elah 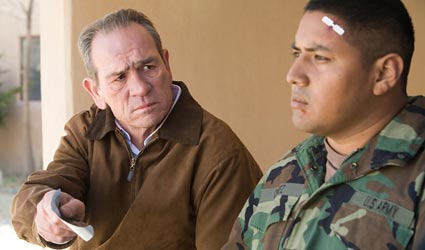 
Tommy Lee Jones shines as a father investigating the death of his soldier son in Paul Haggis's In The Valley of Elah. The title comes from the setting of where David met Goliath and turns up during a bedtime story.

The trenchant picture from the director of the heartfelt, winning Crash is inspired by a true story. Jones's Hank is a no-nonsense Tennessee trucker probing into the bureaucracy of his lost son who served time in Iraq. Disturbing truth unfolds as seared body parts are found on an Albequerque, NM military base.

The M.P. are given carte blanche by the local crime enforcement, and they point Hank into the direction of a very sour drug deal.

Hank, once an M.P. himself while in Vietnam, strongly feels that his son (Jonathan Tucker) wasn't killed inside military lines; the body was moved prior to dismemberment. Charlize Theron is Emily, the police detective who experiences the chauvanism around her profession, who takes an interest to Hank's plight to get to the bottom of the case.

Haggis works sharply with his crew, especially cinematographer Roger Deakins to juxtapose the austere flashbacks (where Tucker is seen) with the barren sun-baked landscape of the Southwest.

The film often works as a procedural as the unlikely union of Hank and Emily round up suspects, some of whom toured in Iraq with Hank's son. It also pulls no punches when it concerns the mental condition of many soldiers returning from the ongoing Iraqi conflict.

Similar to his top-notch work in The Three Burials of Melquiades Estrada, Jones makes the jaded Hank someone who's gone the full gamut of emotions, including anguish and remorse.

For those who thought Crash was too overwrought, the lasting moments don't coincide in a way for what tellingly preceded them. Yet throughout this tale of a grieving father there is a thoughtful, mature way about it.