In The Line Of Fire 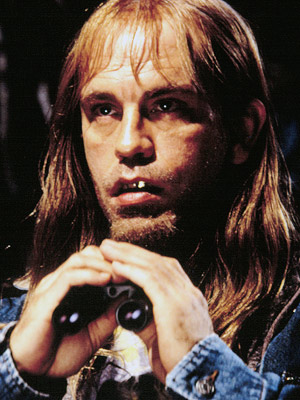 
Clint Eastwood and John Malkovich play cat and mouse with each other in a thrilling suspense action film.

Secret Service agent Frank Horrigan (Eastwood) is a complex agent. He knows his work but believes he is responsible for J's assassination because he didn't shelter the President after the first shot. Mitch Leary (Malkovich), a bitter deranged killer, is determined to test the theory that if an assassin is willing to gibe his life he can kill the President.

Leary also knows Horrigan's skeleton and calls regularly to taunt him. Malkovich's performance is stunning as a cold, calculating, brilliant killer. Eastwood's character has some of the elements of Dirty Harry, particularly in an early scene in which he saves a fellow agent by coldly shooting three villains. He is a less secure law enforcement officer than Dirty Harry. Age is catching up with him and he is not sure he can put his life before the President's. Horrigan's fears and skills lead to a prolonged twisting search for Leary and a dangerous chase near the end.

It is well written by Jeff MaGuire and skillfully directed by Wolfgang Petersen (Das Boot), In the Line of Fire is an excellent quality action adventure with philosophical overtones.