Interview With the Vampire 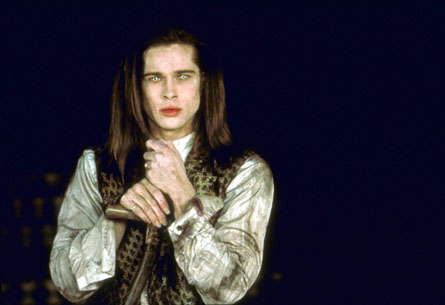 
The first novel in author Ann Rice's best selling Vampire Chronicles is brought to the screen by Director Neil Jordan (The Crying Game) and stars Tom Cruise and Brad Pitt.

Cruise was a very controversial choice to star as the vampire, Lestat. Lestat is a flamboyant, conniving, and vicious killer and Rice was very vocal on how she thought Cruise was too nice to bring life (or should I say "undeath"?) to her character. Rice needn't have worried. Cruise does a great job creating the dark, sinister Lestat.

Interview with the Vampire begins with Louis (Pitt) relating the story of how he became a vampire to a writer (Christian Slater). Louis brings him back to a night in 1795 when, suicidal over the death of his wife and child, he falls prey to Lestat.

Eager for a little midnight snack, Lestat attacks Louis, and just before he dies, Lestat gives him the choice of death or eternal life. Without knowing the consequences of being a vampire, Louis chooses life.

However, lacking Lestat's relish for his lifestyle, Louis is sickened by it and can't bring himself to kill a human to sustain his strength. This bit of plot leads to scenes of animals being killed for their blood. Always the aristocrat, Lestat prefers his rat blood served in crystal wine glasses.

To round out their little family, they turn a beautiful orphaned girl into one of them. Claudia is strong-willed, selfish and commanding, and as played by Kirsten Dunst, is mature beyond her years. She wraps Louis around her finger and clashes with similar-natured Lestat, and causes a breech in the men's relationship.

Rice incorporates an abundance of eroticism in her book and the film likewise shows a close, perverse relationship among the characters.

Cruise captures the strong persuasive attractiveness of Lestat, his usually friendly smile easily turning into a quick sneer. However, Pitt, besides looking forlorn throughout the film, fails to bring conviction to the sad Louis.

Interview with the Vampire spans 200 years and takes place in New Orleans, Paris and San Francisco. The sets range from magnificent mansions to a cavernous cellar dotted with tombs, to scenes of death and decay from the plague.

Over the years, people have been fascinated by vampires. The idea of never aging or dying is appealing to may. Here, the vampires' pathetic and painful lives are quite luridly depicted.

It may be unreasonable to expect a film about a species who live off the blood of others to be anything but bloody, but there is an excessive amount of violence and gore. Scenes of a mutilated prostitute begging to be spared and a theater group feeding on a young woman are especially graphic.