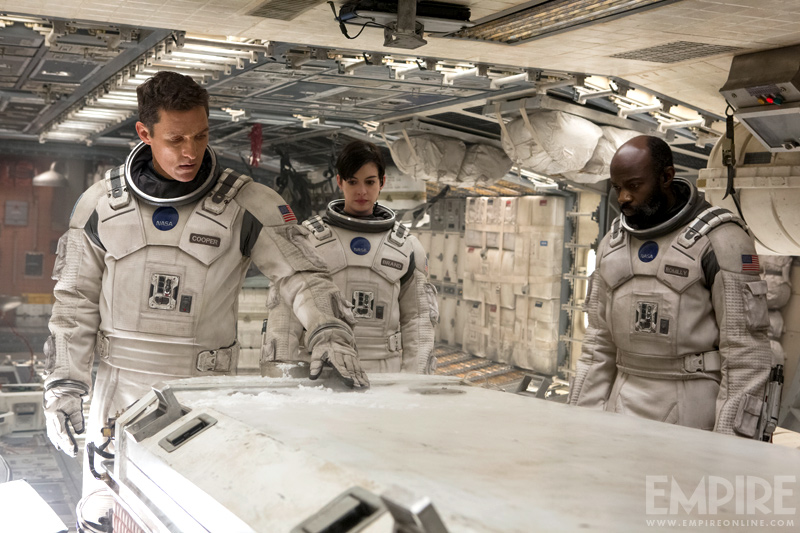 
Interstellar, is a long journey into the future and back to the past.  It rides on the forces of human emotion, science and the hardware of space flight.

The long journey through a worm hole, and past a black hole in a journey that takes place when Cooper (McConaughey) makes the decision to take the Hail Mary trip to the stars with the hope of saving humanity on a new undiscovered planet even as it costs him the respect of his young daughter who needs him to stay on Earth with her.  The turns of science fiction and interjecting the theory of relativity play a significant factor as he doesn't change but she grows up and becomes Jessica Chastain.

John Lithgow from 2010 is the grandfather in the family which is urged to bring up farmers with the hope of restoring the food loss that continues to fail as the land is blown away quite like  the land in The Grapes of Wrath.  Science is considered a waste of time in the philosophy of survival which the World is facing.  For some reason corn is the most reliable crop and may be the last surviving food and that is grown on Cooper's farm.

Patterns in the dust bring Cooper to a secret location where NASA continues to send astronauts into space searching for a new planet.  The program is so secret the budget is not known to the public.  From the base folks are shot out into a worn hole toward a dozen possible planets for humans to colonize as the Earth falls.  One team has communicated back with hope for a new location.

The script by director Chris Nolan at this point attempts to explain how a fold in space can allow space travel that appears to be beyond the speed of light.  Cooper's daughter has become an adult but the residual of angry feeling that her father abandoned her to die on Earth as he reached for the stars to save humanity continues.  With a difference in the passage of time the two pass each other becoming the same age at one time which is like Benjamin Button, she continues to grow older and he remains the same.

Director Nolan uses loud noise to keep attention as the space vehicle landing craft fights it way through a twisted space flight and landing on the new planet, where everything is not as expected.  The signal from the planet from an earlier traveler is motivated by a different purpose that is not as pure as Coopers.  The embryos which Cooper and his partner Brand (Anne Hathaway) are carrying to create a new human society may not reach an environment which is suitable for survival.

What is unexpected is that the action and performances work better on Earth than in space.  The conflicts and tension and dust provide more tension and excitement than the flow of the vehicles in space.  The key factor which takes a big jump and reminds us of an old mystery movie comes from the bookcase in the daughter's room.  But it fails to convince as coming from space flight and the bending of time from the theory of relativity.  The robot here named TARS looks like pieces of monoliths folded together and is far more supportive than HAL from 2001 saves the space travelers through its dedication.

The overall explanation of the solutions and the communication between the father and daughter through  space is a quality piece of work, but the end result is less pleasant to watch than expected.