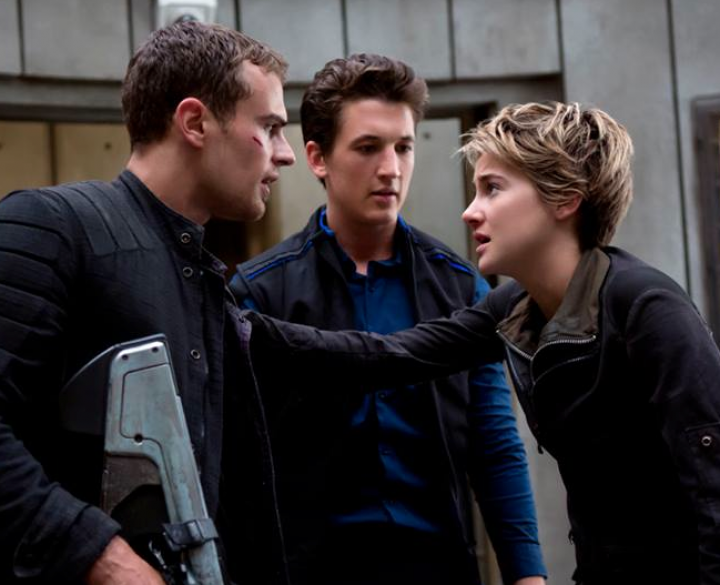 
This second film in the Divergent series has Shailene Woodley returning as the tough heroine, Tris Prior.  She doesn't neatly fit into any of the 5 factions in the dystopian world in which she's trying to survive, so she and her boyfriend, Four (Theo James) are continually on the run.

Kate Winslet returns as Erudite leader Jeanine Matthews.  She's singularly obsessed with tracking down Tris so throughout the film, she and Four are running and hiding from Jeanine's minions.  They jump on and off speeding trains, leap from buildings that are disintegrating  beneath their feet and fight off large mobs.  Jeanine wants to force Tris to open a box that was hidden by Tris' mother before she died.  She believes that it holds the secret to destroying all Divergents, and can only be opened by one of their own kind.

Tris has grown up a bit in this sequel.  She questions her past and has nightmares about the people that were hurt because of her actions.  She's Divergent because she doesn't fit neatly into any category and that knowledge is uncomfortable for her.

Shailene is clearly the star here.  Theo James' character was key  in the original as he was the instructor, but since Tris was obviously a good student, his role is now diminished.  She's grown as an actor, she's good in both the action sequences and the emotional scenes.

Director Robert Schwentke (Flightplan)  creates a crumbling futuristic Chicago.  There's a domed building that houses the peaceful faction,  modern buildings where Jeanine practices her evil and dozens of bombed out skyscrapers.  The fight scenes are good, and so is the acting, but the story-line suffered from a lack of connection between the characters.  The only one that showed any humanity was Tris, so it was hard to care about anyone else.