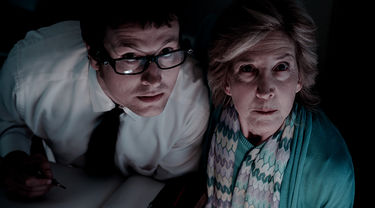 
Insidious from the outside appears to be a typical hunted house film filled with mayhem, blood, punctured eyes, appendages ripped free and all that has become standard fair for the latest generation of horror films.

Insidious is none of the above; it takes time to be a scary movie. The scenes we jump in our seats from may not be quite up to par with Psycho or Alien, but it presents situations in which director James Wan sets us up as Alfred Hitchcock suggested. "Place the characters in a position which is to be feared hold the audience and just as the danger appears to go away bring out the terror loudly and overwhelmingly."

This one begins in an old house, it seems houses with dark woodwork and dripping faucets have semi-human characters in the plot. This one spreads over two houses. Josh and Renal Lambert (Patrick Wilson and Rose Byrne) are parents of two boys along with an infant daughter. He's a teacher and she stays home with the 3 kids who create a hectic world of noise and clutter. The baby monitor is always turned up and it becomes a source of frightening noise. It all places the mother and the audience on edge.

One son who is adventurous falls during an attic adventure and remains unconscious for months. The house is blamed and a new older house with dark stained wood becomes the family home. The terror continues and deep voices come from the monitor and mom feels something in the air. Dad stays late at school to duck the tension. Next startling visions fill the windows of the bedroom and the imprint of a bloody hand suddenly appears, all nicely timed to unnerve all of us.

Josh's mother (Barbara Hershey) has some idea about the events but she is not fully candid as to why the family is haunted, even when the screen fills with apparitions. Two 19th century girls and their parents, a chilling scene with Tiny Tim singing "Tip To Through The Tulips," popping bulbs, red faces and ponies are all scary to watch.

Even the comic ghost busting three some have difficulty learning the truth and Insidious continues to be Insidious. It never stops scaring and that's why it's worth seeing.