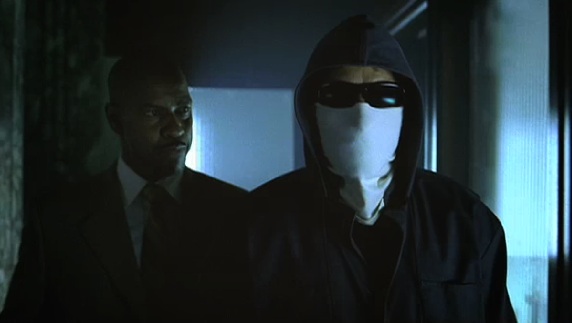 
Spike Lee and Denzel Washington have formed a nice rapport over the years as director and actor. Inside Man is their fourth outing together in what appears to be Lee's most mainstream picture to date. And, a notable rebound after his last, disastrous indie, She Hate Me.

There is an energy that the authorial Lee elicits from his cast, even if the key performers aren't on view together as much as one might hope. The tangled if rather perceptive plotting from newcomer Russell Gewirtz helps provide a variation on those 70's crime dramas like Dog Day Afternoon which is the prototype for this tricky, dangerous cops and robbers with hostage crisis film. It is intense, but not really that taut, and probably requires some suspension of disbelief.

The true motivations and intentions of one Dalton Russell (Clive Owen of Closer, Derailed) are kept hidden for a length of time. His "perfect crime" is an intricate heist of a high profile Manhattan Trust Wall Street Bank. He'll lock the doors gaining 50 hostages masked with baggy suits.

A standoff will ensue between Russell's group and the police. Washington's Keith Frazier with thin moustache and nearly shaven head is trying to get out of the doghouse of his department. The jaded but prudent, somewhat risky detective here is a negotiator who works with partner (a fine Chiwetel Ejiofor of Serenity) and a local captain of the ESU, John Darius (Willem Dafoe of XXX: State of the Union). Jodie Foster delights in a bitchy role, a welcome change from the likes of Flightplan, as a fierce power broker, retained by bank mogul and philanthropist Arthur Case (Christopher Plummer). Foster's Madeleine has been helping out the nephew of a notorious, elusive real-life individual, but has vital business to recover something from the bank's safe deposit area.

The mood of Inside Man isn't about dramatizing theatrics or working up the media with lather. Lee knows the Big Apple inside and out having lived nearly his entire life in Brooklyn and underlines the melting pot with some racial motivation in relating the milieu of the hostages and the robbers. The cinematography from Matthew Libatique reflects in some startling lighting that is in sync with a bracing mix of sound. Sometimes the music of Terrence Blanchard chimes with too much bombast, and the twisting, turning story is somewhat diminished by the approach Lee and Gewirtz take regarding the manner in which heist unfolds.

Still, the crackerjack entertainment picks up after a sagging center as the actors relish this rather fresh take on a genre. The prickly, astute inner sanctum touches on Nazis and diamonds, but the clarity of location work and character interplay delivers the goods with sharp editing by Lee's longtime collaborator Barry Alexander Brown.

Similar to Hugo Weaving in the brainy, less action-oriented sci-fi flick V for Vendetta, Owen exudes command while behind a mask for long periods of time. Washington is dapper and projects a sympathetic presence as Frazier takes chances when it comes to things like pizza. Interrogation sequences are smart and funny with Washington and Ejiofor's Bill Mitchell providing instant on-screen aplomb. If Foster's Madeleine perhaps is a bit underwritten, then she knows how to polish a spunky, icy broker.

The efficacy of the "two-camera" method reflects the emotions of dealing with a mastermind like Russell who makes the cops feel quite unsettled devising riddles and bugging their mobile command center. While Inside Man seems to be too clever for its own good, perhaps above its "pay grade", a combustible testimony to cruel people in high places that allows Frazier an opportunity to find wisdom from uncertainty. Though coherence and certain subtleties isn't a strong suit of this "thinking man's heist film", Lee's multi-faceted approach strips down a fairly worn genre with dark, dizzying swagger and intriguing distraction. He still has game outside the box probing beyond the digital trickeries of firewalls and unethical practices.