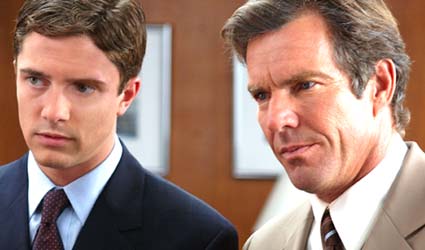 In Good Company, the latest screen-writing/directing effort from Paul Weitz (who made the engaging About A Boy), comes forth with honesty in eliciting humor and ethos from an ever changing global corporate climate where takeovers are commonplace.

Dennis Quaid has a much better part this time around than in The Day After Tomorrow and The Alamo as 51 year old Dan Foreman, head of advertising sales of Sports America, something like Sports Illustrated. This middle aged husband who’ll need to hang on to his 20 year position as wife Anne (Marg Helgenberger) surprises him with her with a new pregnancy. That plus a corporation acquiring the national magazine turn his life upside down. To top it off, Dan becomes a wing-man for new prodigy boss, 26 year old Carter Duryea, a decent part for Topher Grace.

The effect on the magazine and Dan’s life is contrasted with Carter whose seemingly perfect yuppie existence has resulted from his savvy corporate synergy, the film’s original title. How he cross promoted cell phones with Krispity Krunch, a sugary breakfast cereal, has him in a scared, caffeinated state groomed as a corporate manager. A short, seven month marriage to Kimberly, a small role for Selma Blair, leads to Carter bonding with Dan after many other employees have excuses to avoid socializing with him.

In Good Company boasts an intriguing, if schematic father son quality between Dan and Carter with complications coming from Dan’s 18 year old daughter, Alex, acted with warmth and maturity by a very pretty Scarlett Johansson (Lost In Translation). Alex is transferring to NYU to pursue her studies in creative writing though she’s proven her talent as a pro in junior tennis. She doesn’t know that dad has taken out a second mortgage to help make this happen.

Though Weitz doesn’t have writing in the final act to match his relaxed direction, the film contains some comedic, touching moments as Carter and Alex keep their relationship hidden from Dan. The dynamic between the three comes to a head at a swank restaurant and the un-satirical corporate approach is felt in a flamboyant cameo by Malcolm McDowell as head honcho Teddy K. Who is challenged by old fashioned off the cuff salesman Dan.

The film may become downsized in the grand scheme of things but Quaid and Grace manage a convincing relationship and good support is offered by David Paymer and Philip Baker Hall as long time businessmen.