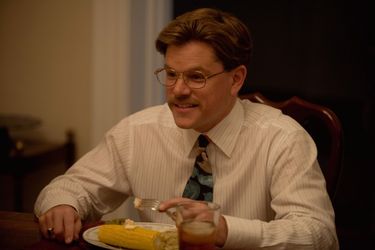 
Steven Soderbergh and Matt Damon are back together in a "lighter" drama about the true-life story of an eccentric, if rather keen whistle-blower. A dapper fellow who refers to himself as Agent 0014, bespectacled and moustached in what is like a droll variation on The Insider.

The Informant! stars Damon, Scott Bakula, Joel McHale, and Melanie Lynskey, and from its punctuation mark you can guess the joking means justifies earnest self-conscious complicity which still may leave some viewers scratching their heads (ala the jaunty Julia Roberts/Clive Owen romp Duplicity)

Working from the book by Kurt Eichenwald, scribe Scott Z. Burns allows Damon (who gained 30 pounds) through Mark Whitacre to show why he is one of his generation's finest thespians, especially in the voice-over department. With a wink (unlike his energetic, populist Erin Brockovich) Soderbergh zeroes in on an agri-business conglomerate based out of Illinois ("where corn goes in one end and profit comes out the other"). The lynchpin of the U.S. government case is a price-fixing accusation, based on evidence submitted by Whitacre (the company's headstrong VP) - its informant.

One gets into Damon's vivid commitment into a role with obsessions and active stream-of-consciousness as he divulges in a spry uncanny way that "I'm the good guy in all this".

Whitacre, with a strong biochemistry background, definitely stirs the giant company (Archer Daniels Midland - ADM) pot when mentioning of malfeasance allowing a foreign competitor to put their hands in the processing of lysine (a food additive marketed by ADM).

After phone-tapping of a willing Whitacre and prodding of wife Ginger (Lynskey), the enthusiastic Midwestern executive secretly tells the called-in FBI of the huge aforementioned scheme surrounding lysine, specifically, surprised agent Brian Shepard (Bakula). Mark almost feels like a boy in a game agreeing to go undercover for the feds to try and get admissions from the higher-ups, hardly directly revealed.

A devilish, though hardly smug Damon steals the show through the outward and inward conflagration that unravel through Mark, as there's more to the story than some incriminating recordings. Soderbergh again does his own camerawork by his nom de plume, Peter Andrews, even getting access to the Whitacre home as the undressy corporate milieu is captured right down to a tee.

This lighthearted, yet faithful account even includes cameos for The Smothers Brothers - Dick appears as a judge and Tom as the ADM chairman. As for the backup, Bakula and McHale as a fellow agent are fine, and Lynskey is good as Whitacre's devoted wife, whose been a part of his life since childhood. One maybe wishes this imaginative lark had more into the effect of the marriage on a odd, often amusing life full of machinations, especially from the attaching nature of Ginger.

Nevertheless, in its smug, loopy self-referential way The Informant! is produced with a flair for the past as Marvin Hamlisch's music indicates, pointedly doing justice to corporate skulduggery.