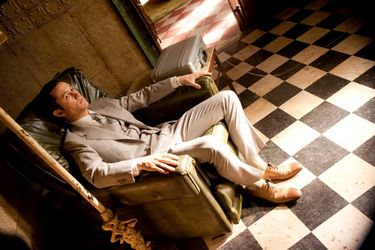 
Christopher Nolan serves up a rather dazzling sci-fi action thriller like a cinematic cryptographer with consistent thoughtful, technical virtuosity. Some may not make it out to be that heady as they go along with the multi-layered, exhilirating convolutions, but will be hard-pressed to render their comprehension with clarity.

"Accessing the mind through dreams" is the name of the game in a fantastical, sweeping tale of projection into levels of the subconscious. With affection to an outlandish extraordinary filmmaker like Stanley Kubrick, this often tense, illusory experience rides a little like The Matrix crossed with a little 007 and even Nolan's own dizzying mobius strip Memento.

Like that reversing, riveting much more modestly budgeted drama with Guy Pearce as a harried insurance investigator, this remarkable high-budgeter achieves potency from what motivates DiCaprio's Dom Cobb. Cobb can seize much more than computer hackers during a mark's restful state. But, in the director's devilishly intricate screenplay, a vulnerable, tormented Cobb turns from harvesting to sowing an idea.

Dom's strange speciality for a living used for corporate espionage has left him acquiescing to an influential executive Saito (Watanabe) to tamper with a media heir and rival, innocent Robert Fischer (Murphy) who has issues with his dying father (Pete Postlewaite).

The establishing of this gleaning process may be hard for viewers unfamiliar especially with Nolan in the early reels as Dom's dilemma is revealed. His carefully selected team includes cunning, shift-shaping veteran forger Eames (Tom Hardy of RocknRolla), reliable right-hand man Arthur (Gordon-Levitt), as well as protege and precocious architectural student Ariadne (Page). She, like the elderly Miles (a fatherly Caine) who suggests her to Dom, almost at times serves as an audience representative while getting an informative lecture from her mentor.

Also, part of the Cobb's "dream team" is Dileep Rao as chemist Yusuf who synthesizes what is needed to mutually partake in the desired subconsciousness. There is a sense of having control over one's disorientation of space and time to keep one on edge with astonishment of something variable and interconnected. Inception reaches beyond distinguishing a fine line between dreams and memories, their nature and operation and what it takes to "get a grip" on them. One of the motifs here that often captivates is how the characters handle an unspecified small grey four-sided spinning top at one time or another.

In charting something with scope and gravity, Nolan is unapologetic to the types of twists that wildly envelop those immersed in the experience in which Cobb is the only character to interact with everyone else. The text and subtext obviously is open to interpretation with ambiguity as well as allegorical and metaphysical mystery. Extraction also relates to the philosophies of those like Carl Jung and Sigmund Freud when it comes to notions of the unconscious and psychoanalysis.

Key to the noirish-sounding Cobb who is treated like a Roman Polanski, also prohibited from the United States, is what goes on between the super thief and his wife Mal, endowed precisely with femme fatale mystery by Marion Cotillard (the long-suffering wife in Nine). That part of the story with its tragic element is reminiscient of an unrestrained Shutter Island where DiCaprio's federal marshal Teddy Daniels longed for his lock-wearing wife accused of heinous crimes. Now, with Mal, there are also disparate emotional connections with flashbacking and recurring dialogue as this part of the branching and interwoven narrative structure is most crucial to the film's success.

Nevertheless, with the staging of tremendous set-pieces from unspecified snowy mountains, agoras bustling in Tangiers, huge Tokyo skyscrapers, and an unusual hotel with its (rolling and tumbling) corridors, the human element and the power of ideas aren't lost in such sheer ambitious gimmickry. From the lensing of Wally Pfister, Guy Hendrix Dyas' designing, and especially the score of Hans Zimmer as well as Lee Smith's editing, these expert contributions aid DiCaprio immensely in an acerbic, nuanced portrait of someone so messed up he needs to mess up others.

Maybe, in the end (for some), Nolan's ambitious, often towering achievement (where "the mind is the scene of the crime") goes a tad overboard and overwrought in the lattergoing (who know how much tantalizing stuff might have been left on the editing room floor). And, the remarkable script doesn't allow for alternate reality maze constructor Page (so good in indies like Juno) to showcase her range as the scenes with her and DiCaprio don't crackle perhaps like they did on the page.

Responding better are a scene-stealing Gordon-Levitt (500 Days of Summer), a cheeky, deft Hardy, and a surprisingly sympathetic Murphy (Red Eye), while it's good to see Tom Berenger (as Fischer's attorney) back in the major leagues of movies even in a lesser part. And, most notably, Cotillard runs the gamut of emotions with eerie cogency as Nolan incorporates some of the music of the stricken Gallic songstress the Oscar-winner portrayed in the vibrant, if somewhat confusing La Vie En Rose, Edith Piaf.

In a new frontier in the art of psychic espionage, skulduggery rears its ugly head abruptly in a world carefully and sensitively calibrated to a nifty deluged neural variation on the heist film. Always intellectually and visually stimulating, many layered and reflected images in Inception will be hard to let go even after one has been enabled through grief, regret and redemption marveling a bold, new virtual reality.