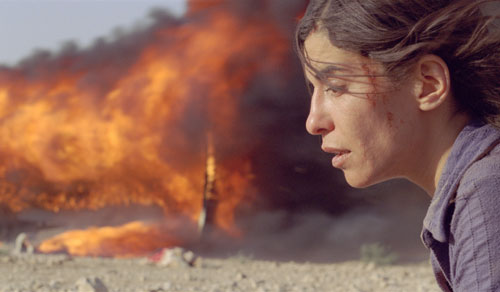 Villeneuve, who made the very peculiar, yet absorbing Maelstrom and worked his way up professionally from short films and videos, has made quite an emotional and visceral recreation; an experience felt from the brutality continuously plaguing the Middle East.

What places the onlooker into devastating politically charged situations comes from twin siblings Jeanne and Simon (Desormeaux-Poulin and Gaudette) getting two mysterious envelopes when the will of their mother Nawal (Lubna Azabal) is read by her notary republic Lebel (Girard). These envelopes were intended for a brother they never knew of, and a father whom they thought was dead.

There's a strong sense of what the Lebanese-born mother Nawal was going through before her tragic end as Jeanne and Simon unravel her mystery. Little clues pop up in what is less lyrical than Lebanese native Wajdi Mouawad's antecedent. Bigotry within drawn out civil war containing genocide and terrorism cuts poignantly into revelatory personal and mass incidents.

Azabal etches an exceptionally inspirational, intrepid figure caught in the middle of ravaging senselessness as Nawal's children learn of her indefatigable nature in the midst of so many impediments. Moving forward means coming to terms with an unsettling past.

The filmmaking and storytelling probes with unwavering impressive dramatic effect and universality that stimulates the mind and heart throughout. A scorching, often shocking Incendies (which means destruction by fire) finds much umbra on its edges as such a polished production with striking lensing and images from a desert environment enhances the harsh intrigue of one on a quite a complex crucible.