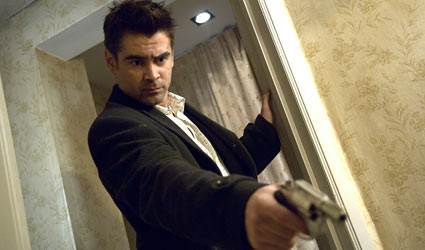 The somewhat eerie, divided "In Bruges" is spiced heavily when it comes to location, with cobblestone streets, and dialogue.

Starring Colin Farrell, Brendan Gleeson, and Ralph Fiennes, there is something akin to the likes of "Pulp Fiction", even Orson Welles' "Touch of Evil". Some viewers would like it to be in the open-caption format as some of the brogues may fall on deaf ears.

The centerpiece of this loopy, sometimes pungently droll lark hinges on the offing of an innocent child during a planned hit on a priest in his confessional.

Ken is like a surrogate father figure to the reckless Ray; Gleeson makes him sympathetic while cold-blooded killing runs through his veins. Farrell endows uptight, psychotic tendencies to Ray consumed by guilt, similar to his addled character in Woody Allen's misguided "Cassandra's Dream".

For a while, one is lulled into the aroma of the placid, precious medieval ruins. Some may find it to be rather quickly pretentious and putrid, while others might find it a fine, contrived, bloody mess.

McDonagh cobbles the story almost in a series of digressions, putting one under the thematic ether of sin and redemption relating to the Irish Catholic Church.

A scene-stealer would have to be Jordan Prentice as a lascivious, racist dwarf who is the star of a movie being shot on location by a Dutch film crew. Clemence Poesy provides zaftig interest for Ray as Belgian drug dealer with an angry boyfriend.

Some of the scenes are unwieldly zesty for some, as when the dwarf and Ray are with two prostitutes, not to mention a couple of Canadian diners who speak out against second-hand smoke. The symbolism from the constant appearance of the midget with a peculiar drug habit reflects the bloodshed of that kid in the church.

Before the final voice-over of "what hell is", McDonagh lets the vile and creepy showdown in the town square in front of a Gothic Cathedral. But, by that point, "In Bruges" has started shooting blanks, at least in an improbably shameful way, before Ray is getting robbed.