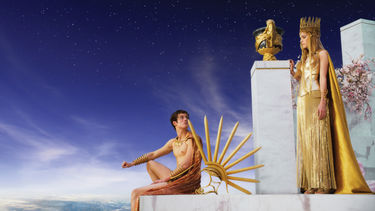 Henry Cavill plays Theseus, a  brave mason from a small village.   He looks the part of the hero - he's very handsome with a strong jaw, a chiseled  body and of course, he can really fight.   The evil  King Hyperion, played by Mickey Rourke ( who looks like he hasn't washed his hair in decades)  plays his enemy, a guy so bad, he spends time coming up with new methods for torture.

Hyperion is trying to find a magical weapon called the Epirus Bow, which he'll use to help free the Titans who had been imprisoned  by the gods for years.  Zeus (Luke Evans), who watches  along with the other gods  from their lofty perch in the sky,  chooses Theseus to stop Hyperion.  Many extreme battles follow. Golden clad gods and Titans wield swords, hammers and various other weapons  with deadly results.   Heads are severed, limbs are cut off, and blood is flying everywhere.   Advertisement for the film warns that its  from the producers of 300, so I kind of knew what to expect.   However, the  graphic violence is still disconcerting.

Freida Pinto costars as a beautiful oracle and John Hurt plays an old man who narrates.

Even though I winced at times, I was blown away by the landscapes and stunning visuals.   Cliffs that go on forever, a wave that becomes a tsunami and takes over the screen, and costumes in vivid red and gold against dark backgrounds, were pretty spectacular.   Even so, a plot that at times is confusing with too many characters who pop in and out of the story and unending carnage, ruined it for me.