I Love You Phillip Morris 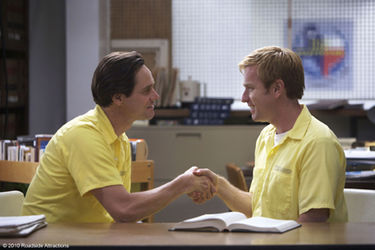 
It's hard to go much beyond admiration for this freewheeling, occasionally uproarious dramedy from the writers of Bad Santa. It does seem to have a lighter, blithe bravado going for it when it comes to cell mates who become soul mates. It could be more than "counter-programming" during a holiday blockbuster season.

A much-delayed I Love You Phillip Morris (based on apparent actual events) stars Jim Carrey (Disney's A Christmas Carol) and Ewan McGregor (The Ghost Writer), and it's most noteworthy because of the sexual orientation of their characters. It has the coarse and the jagged underneath what is sunny not that unlike the aforementioned Billy Bob Thornton starer of Yuletide cheerlessness. Though arguably not rendered with the same corrosive panache.

Plenty happens in the earlygoing of this vividly subversive escapade, getting into its fraudulent, scheming in a Don Quixote manner. Steven realizes he can be himself, which means abandoning his family. He'll live luxuriously for a while with boyfriend Jimmy (Rodrigo Santoro) in Miami before meeting the eponymously sweet Morris (McGregor with two Ls in the characters first name) after being incarcerated. This mercurial guy will go the distance to be with the love his life. That includes a little convenient legalese and chief financial operating.

From the line readings, editing, and visual gags helmers Glenn Ficarra and John Requa go full bore with such scamming chicanery that just may be too far-fetched to be only partially true. But, they make their point about the importance of togetherness as Carrey and MacGregor embrace the needs of disparate types like Steven and Phillip.

In a farrago with physical comedy (Carrey has the showmanship of a contortionist down pat) dotted with a few thoughtful interludes there's a sense of viewer detachment when it comes to richness of characterization. Yes, there seems to be money and passion at the forefront of someone who puts himself at risk. This unsentimentally outrageous, often wildly inappropriate romp seems to catch up with itself in an all too cold way. Like trying to get even with a company even before the controversial Health Care Reform legislation was voted in.

I Love You Phillip Morris, filmed in Miami Beach and Louisiana, goes about its way with dirty-minded fervor just beneath its Hollywood sheen. Having Carrey and McGregor in these parts might be refreshing to some, startling for many others, but the result isn't something that is respectful to a community still looking more equality and tolerance at large. It's just that the in-and-out of jail and the verve Carrey (reminiscent of his work in The Cable Guy) brings to the role (stressing the importance of steering under auto duress) makes it more of a vivacious, elaborate impersonation than a candid revelation.