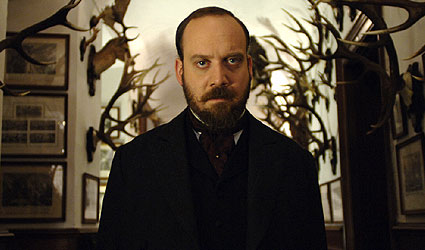 The prologue lets us in on one Edward Abramovitz, a cabinet maker's son, who is influenced by a nondescript travelling magician. The young fellow starts out sleight-of-hand techniques before being attracted to the young comely Duchess Sophie von Teschen. Their closeness is soon dissolved before consummating a plan to run away together.

During a Vienna show, Eisenheim and Sophie visually connect as she wears the locket he personally engraved for her back in their youth.

Paul Giamatti continues his string of quality performances as Chief Inspector Uhl, quietly an illusionist himself. Uhl is the detective-for-hire by the unhappy Prince Leopold, wary of the secret relationship rekindled by childhood sweethearts. A cat-and-mouse scenario is staged with smoke-and-mirrors finesse by Burger, who also penned the script. Will Eisenheim be able to escape accusations as a fraud and a criminal?

Burger works in a deftly measured way to create the kind of setting where conjuring is feasible, even if some may feel the proceedings are too stiff too often. Still, the interplay between Norton (better than he was in Rounders or The Score rehearsing for the role with noted magician Ricky Jay - Heist) and Sewell, and especially the versatile Giamatti has teasing appeal to it. Biel is surprisingly good and believable opposite Norton who actually is chivalrous in a way for the betterment of his peers, giving it an ensemble touch.

So, a delicately ominous piece flirts remarkably with the truth, with the source being Steven Millhauser's short story. If the acting isn't persuasive enough then the production period qualities may be more than flavorful. The lensing by Dick Pope features much candle lighting, while the uncertainty is heighted from lavish designing and Philip Glass's moody score.