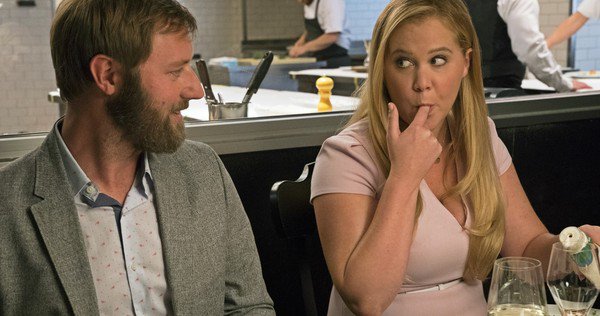 
Amy Schumer (Snatched, Trainwreck)  uses physical insecurity ('fat-shaming') to her advantage in a slight, if good-natured comedy from the writers of Never Been Kissed.

I Feel Pretty may have elements that frequent moviegoers might connect to pictures like Shallow Hal and 13 Going on 30 as the blonde actress/comedienne's Renee ultimately moves towards personal acceptance. Or as one character utters, "You don't really care how the world sees you." And, Schumer clicks into the nonsense arising from issues of self-respect and body image. She holds the screen well-enough but the notion is slender considering the length and the mawkish denouement is pretty obvious from the start.

Renee's character has more breadth and sweet-temperedness than seen in a Schumer feature in being in the basement of a beauty outfit and like a pariah in a SoulCycle class next to fitness buffs quietly wishing to be inarguably attractive. Banging her head there makes her runway model fantasy bestowed that sparks behavioral change. Believing that folks (who see her in the slimness that isn't there) are making an excessive show of pleasure towards her affords some farcical wit.

First-timers Abby Kohn and Marc Silverstein try to work nobly off of Renee's shot of assertiveness that leads to good things professionally while supplementing her renewed understanding. She gains the attention of Ethan (comic Rory Scovel) drawn to her foibles. Her 'promotion,' however, is an effort for her firm to abscise its aristocratic profile in order to earn a wider distaff circulation not fitting what's been vogue.

While Schumer's way with Renee often fits the bill for the construct, the general misunderstanding intertwined with haughty glamor sorts isn't that inviting though stressing the inhibitions that reach even those higher up on the cosmetics chain. Like a shrill, self-conscious dollish Michelle Williams in a funny heiress of a secondary role, and a briefer turn for Lauren Hutton as her imperious grandmother. Less effective are Busy Philipps and Aidy Bryant as chums who hardly are fashion role models.

In being less naughty and crude this go-round Schumer arguably exhibits more nerve here than in previous efforts (on the silver screen). But a game star and filmmakers aren't able to make the dissension before I Feel Pretty and its zany posturing more than sporadic head-bonk entertainment.