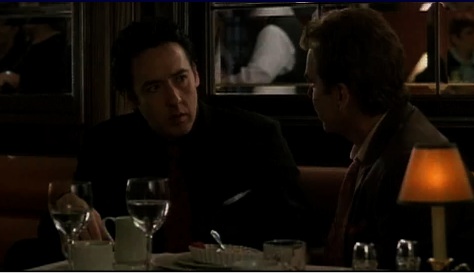 Harold Ramis's Ice Harvest is a contemporary noir that reunites John Cusack and Billy Bob Thornton from Pushing Tin. After being pitted opposite one another in the unstable environment of air traffic control, they're together and apart during one long Christmas Eve night that starts out rainy and gets slick, not just in the weather department. Ramis has fun with a dark, sarcastic tone in a film not really equipped for mainstream audiences. But, over a dozen hours this unscrupulous material is an early Xmas gift for a mature Thanksgiving audience.

The task of handling the characters and the deteriorating conditions is sometimes a chore as the picture almost seems like it's on thin ice, but there's something to be said for what characters like Cusack's Charlie Arglist and Thornton's steely Vic Cavenaugh are saying. Ramis is poised to advance this Wichita, Kansas setting with sleaze and duplicity.

Cusack's Charlie is a mob attorney who teams up with Thornton's pornography topdog Vic to embezzle over $2 million from Kansas City kingpin Bill Guerrard (Randy Quaid, also in the upcoming Brokeback Mountain). Charlie gets a bit tense after the plan of Vic to handle the satchel of cash and winds up in a few strips clubs, one of which is run by the vivacious Renata (Connie Nielsen of Brothers and One-Hour Photo). The ideal present for Charlie would to quietly skip town with this stunning lady, as the Danish actress exudes femme fatale presence.

But the fairly snappy, spry screenplay by Richard Russo and Robert Benton from Scott Phillips' novel has Charlie and Vic in a boozy, if perverse whirlwind that makes the former look cagey for a while. The rotund Oliver Platt is Charlie's drinking pal whom he has to chaperone and try to keep his wits about himself.

This crime is far from well thought out and Ramis has a running joke with a benevolent officer (T.J. Jagodowski) that takes into account Charlie's connections and the crooked, unsavory acts he's involved in. Quaid is nicely cast as the imposing scumbag who doesn't appear until around the midway point.

The deadpan nature of the malfeasance helps out Cusack who is in more of his element here, somewhere between Grosse Point Blank and The Grifters. He did have his typical flair opposite Diane Lane in the rom-com Must Love Dogs. And Thornton doesn't have to act as filthy-minded as in The Bad News Bears or Bad Santa. Ramis gives the deplorable and the bawdy some agility even if things accrue incriminatingly in a frayed way.

So, this brightly unctuous Ice Harvest doesn't exactly sparkle with consistent dark wit, yet the inclement evening is smoothly lensed and the soundtrack stays in stride with Yuletide and other appealing, peppy tunes.