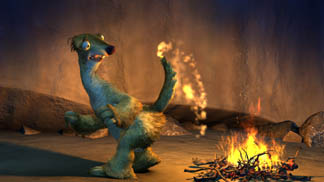 In what can only be called a buddy movie, Ice Age delivers a variety of messages to young and old alike.  Staring the voices of Ray Romano as a mammoth named Manfred, John Leguizamo as Sid the sloth, and Dennis Leary as Diego the saber tooth tiger the tale involves the travels of these unlikely companions as they attempt to reunite a lost infant with its parents.

Added into this mix is a little character that is part squirrel and part rat from appearance - more squirrel in actions.  Scrat opens the film as an acorn obsessed creature running away from the coming ice age all the while refusing to lose his beloved nut.  You will find this amusing creature and his actions throughout this animated delight.

This group of animals all have their own reason for delivering the found infant to its parents; Manfred want to deliver it to get rid of Sid the sloth, one of the most annoying and yet adorable animals you'll ever meet.  Sid wants to save the child because of a kind heart.  Diego the saber tooth tiger, has other plans for the child, his pack has sent him to retrieve it as payback for humans killing part of the pack (remember this is the ice age and the dawning of mankind: it is a savage world).

While there are some pretty intense scenes, most children will get by the moment and fall in love with this band of misfits.  Adults also will find humor and tenderness here while watching some pretty good animation.  This is not Shrek quality, but still very good.

See this film on the big screen as much will be lost on the home size sets.  You'll love Sid and his antics.  You'll be amused by the dry yet witty Manfred and hate then fall in love with Diego.  Best of all you'll laugh, as a family or an individual, with the one minded, virtually obsessed Scrat as he chases his acorn on screen and through time.