I Am Number Four 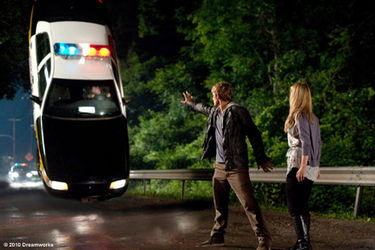 
This lively, but hardly deep first adaptation of a proposed six-book saga from pseudonym Pitticus Lore's popular 2010 novel obviously has something in common with Stephanie Meyer's Twilight series. Of course, knowing what studio is behind this release, a beagle turns out to be very reliable and relevant to the tremulous tasks at hand.

Sci-fi adventure I Am Number Four has a premise that tweeter fans of the Bella/Edward/Jacob scenario could easily lock into and having Michael Bay as the producer one can be assured of at least a couple of tense, explosive scenes.

The best, on an action level, arrive in the opening (a jolting jungle ambush) and closing reels, as former teen model Alex Pettyfer [soon to be seen in Beastly] is the eponymous character in John Smith. A moody youth of the hunted, exiled Loriens with extraordinary abilities (like laser-beams of light emitting from his hands) learns of the demise of his previous numeric predecessor at the hands of the wicked aliens, the "Mogs". They come across like crazed compulsive types heavily tattooed, with trench coat, but often leather-clad and fanged.

Helmer D.J. Caruso might be drawing a little from his Disturbia experience with an intergalactic slant as Florida beachcomber in John relocates into a familiar high school in Paradise, Ohio. Of course, there's a demure, comely photography-minded Dianna Agron, cheerleader Quinn from TV's Glee that will help a giddy teen trying to hone his powers become more mindful of the mundane. There's also the rough-houser as an ex-boyfriend, Mark (Jake Abel) and friendship with lonely, scrawny geek in Sam (Callan McAuliffe).

John having to hone his strength and telekinesis within Lorien puberty of sorts adds to the conflict that the British thespian endows to someone not much more palatable than prosaic. How the adolescent fantasy plays out as a more intense coming-of-ager would seem to help Pettyfer perhaps like a Shia LaBeouf (who worked under more efficient guidance in the aforementioned guise of a Hitchcock thriller). Even with Kevin Durant as an evil alien ducat with a sadistic snap and Timothy Olyphant (impressing many on TV's Justified) as John's edgy handler, not so on-line savvy Henri, there's nothing that distinctive or sprightly going on. Maybe Caruso just doesn't give it all more of an intimate, even with attractive folks like Pettyfer and Agron at his disposal.

That's not to say that the males of the (expanded) demographic won't take to the piranha-like, strangely sharp-witted Mogs. Or what Bay and Caruso have in store with some large-scale pyrotechnics and CGI staged in the film's eye-catching, if bombastic high-point. The filmmakers may not have an eagle eye for what could lead to returns similar to Twilight, but having an armed, black leather gatecrasher in Teresa Palmer's Number Six could lead to another flashy, perhaps more involving (especially into Lorien lore) installment.