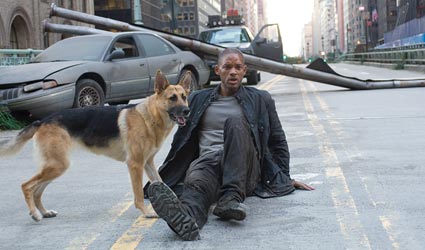 
This latest adaptation of Richard Matheson's novel puts mega-star Will Smith into the role of Robert Neville, once played by the venerable Charlton Heston in The Omega Man.

Here, in I Am Legend, the Hollywood treatment of the source material shows much technical aplomb, as well as Smith's tenacious scientist. But, it feels too split in trying to convince intellectually while having the means to excite the senses.

In 2012 Manhattan, Neville looks to be the only one left after a destructive man-made virus. During the daytime his trusted german shepherd Sam accompanies him around the city, while at night he finds asylum in a Washington Square residence. That is due to the fact that a marauding group of flesh-eating, light-sensitive prowlers have been stalking the city.

The tale, scripted by Mark Protosevich and Akiva Goldsman, takes notice of Robert's perceptions of such a scary predictament. There may be signs of how intelligent these beings are, as evidenced by their leader (Dash Mihok). Also, a strength of humanity comes from a couple of people apparently immune, Anna (Alice Braga) and Ethan (Charlie Tahan).

Director Francis Lawrence (Constantine) works with his crew to make a strikingly desolate New York City. One observes Robert rumaging for food and human companionship. From what his basement laboratory looks like, it still seems a while before a cure is found. Recollections of a large evacuation are haunting for Robert, especially concering wife (Salli Richardson) and daughter (Smith's real-life daughter Willow).

Smith brings some of his steely I Robot mentality here to bring physicality and vividness into Robert's anguish within a detailed devastated cityscape. Ultimately, I Am Legend becomes more calculated and overwrought with set pieces devised from the heated emotions from the confrontations with the infected. Yet, what is on screen versus what isn't can have some frightening impact, as Robert and Sam have some effective moments together that can be compared to Cast Away with its Wilson.

When the zombies aren't in attack mode an intriguing science-fiction apocalyptic tale initially unfolds with later some religious resolve nicely endowed by Braga opposite Smith's growing dolefulness. Storytelling and feelings about light and love sometimes keep this strained effort about the last man on earth in check.