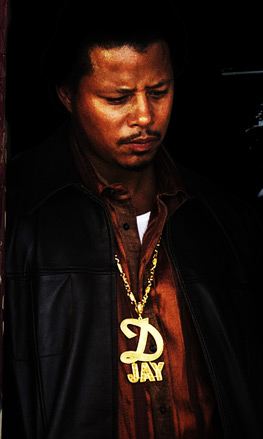 
Producer John Singleton and writer-director Craig Brewer stir up a redemptive rhythm from hip-hop in a sultry southern setting in Hustle & Flow.

The film obviously will be compared to Curtis Hanson's 8 Mile which starred rap icon Eminem. While the story has some rather harsh going near the end, Brewer works persuasively with his cast in a life of prostitution and drugs that extends to musical aspirations.

This gritty version of Purple Rain and even Rocky has as its protagonist, a pimp who calls himself DJay (Terrence Howard). His life in this profession is going nowhere as he takes his primary whore Nola, a spunky Taryn Manning (also in 8 Mile) sporting braided bottle-blonde locks with extensions, who is showing the same signs of unhappiness as her boss and confidante. DJay says that Nola has a "bad equilibrium."

A chance encounter with an old high school friend, Key (Anthony Anderson of Barbershop), begins to show how DJay can start to change his world. Key hasn't really "made it" himself, but works as a sound recorder, and a gospel session in which DJay and Nola sit in on begins to take effect on this Memphis pimp. He wants to go in the direction of a local named Skinny Black (Ludacris of Crash) who has made it as a hip-hop star. DJay mentions that he has to start "walking the walk" and that it's hard to "squeeze a dollar out of a dime when all you have is a penny."

DJay starts writing and recording music based on his life on the street with the help of a gangly white kid, Shelby, energetically played by DJ Qualls of Road Trip. Something connects between DJay, Key, and Shelby. And, one of DJay's whores, the very pregnant Shug (Taraji P. Henson) adds to the sound as a backup singer. Brewer makes the process of making the demo tape (for a cassette recorder?) viable during the uncomfortable conditions when fans have to be turned off and neighbors have to keep their music down.

Hustle & Flow has a noticeable emotional pull from the conflicts arising as DJay pursues his music. A couple of scenes with the outspoken, tough-talking Lexus (Paula Jai Parker) have power, especially one with her baby. Anderson's Key respects his wife (Elise Neal) who must deal with his new exuberance and be hospitable to DJay's ladies and Henson delivers some unexpected poignancy, in a sensitive portrait of a woman desperate to express her love. Isaac Hayes adds a sagely presence as a local proprietor who keeps an eye out for DJay.

The story captures life of hookers and a pimp with a similar intensity to the violent life on the other side of the tracks in 8 Mile. Howard and Ludacris acted well together in the provocative urban drama Crash and DJay and Skinny say that "you can't take the fight out of the dog." Their latter scenes don't quite have the same impact, but one can't diss the film for not having a raw backbone of underlining that everyone has to have a dream. And, within a Memphis sustained with its blues and country music, Howard magnetically demonstrates, with a profile of a younger Clarence Williams III, that it's hard being a pimp.