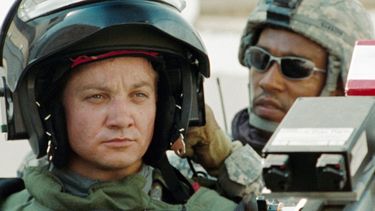 
A different kind of war movie on the U.S. involvement in Iraq has an edgy documentary realism to it, while being sensitively drawn from a battlefield shell-shocked in its own way. As provocative as it turns out to be, this still may not be the film on the conflict that will find an audience perhaps outside those in or connected to the military.

The Hurt Locker doesn't have the bigger names behind it as similarly-timed films like Jarhead and The Kingdom have going for it, but captures a variety of emotions quite effectively like the moral ambiguity which unfolded in In the Valley of Elah.

Kathryn Bigelow's muscular depiction of what a caption relates that "war is a drug" centers on a war-torn Baghdad some five years ago on a bomb disposal unit. Will James (Jeremy Renner), a Staff Sgt. is more than a bit puzzling while his subordinate colleagues, Sanborn (Anthony Mackie) and Eldridge (Brian Geraghty) take issue with his attitude. The contentious threesome needing to get by on their wry sense of humor have a few desert encounters, including one with a British mercenary (Ralph Fiennes of The Reader). Will also develops a friendship with an Iraqi pre-teen named Beckham (Christopher Sayegh) into the pirating of videos and into soccer.

While the screenplay by Mark Boal (who served in this type of squad) nicely dovetails the ethics and inhumanity in a foreign landscape with locals limited on personality especially in their "silent" observation, The Hurt Locker potently relates Will's internal rollercoaster fueled by the adrenaline of peril.

Renner vividly makes James's personal odyssey resonate with some subtlety (and a hard read into his true motivations). Much is under the swaggering veneer as his discomfort is prevalent as he contemplates what life may be like for his wife (Evangeline Lilly) and infant child back home. In the last act, the intense cowboy of a defuser may be acting out more of a fatherly instinct after a killing has apparently taken place.

This moving, unnerving account of men trying to deal with the unthinkable and unpredictable with the difficulty of encountering strangers as real folks. It has some of the intensity and suspense of the recent underappreciated Stop-Loss with some of the bluster of a classic like Apocalypse Now considering that Fiennes, as well as Guy Pearce and an over-the-top David Morse offer colorful cameos.

Bigelow works mightily with her crew to pack a series of set pieces with sudden authenticity using silence to much effect before the artillery comes without much of the effects viewers may come to expect. While The Hurt Locker definitely earns its rating and will test the subwoofer of some unsophisticated sound systems, it's hardly overbearing and gratuitous while proceeding with an off-handed gritty focus on the effects of the extreme and terrifying.