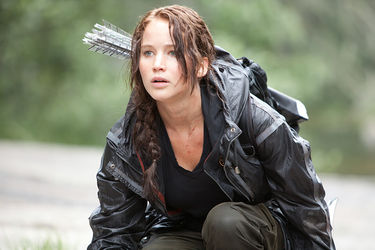 
The film version of Suzanne Collins's first book in a futuristic trilogy is more than a rival for the Twilight franchise, more than a teen-friendly 'Battle Royale' as it smooths out the edges from the author's exhilarating, visceral prose.

The action in The Hunger Games fuels a number of interesting characters led by 16-year-old girl survivalist Katniss Everdeen played with compassion as well as a defiant stoicism by Jennifer Lawrence (who probably used her Winter's Bone acclaimed work to her advantage). Around her, director and co-scribe Gary Ross has assembled an able supporting cast, including Liam Hemsworth, Woody Harrelson, Elizabeth Banks, and Donald Sutherland.

Well after the 'Dark Days', Panem (once North America) is lorded over by the very advanced and wealthy Capitol with twelve districts remaining after an uprising which left the thirteenth obliterated. To remind the remaining districts of its power, the Capitol organizes the eponymous event whereby two teens (one from each gender from each district) called 'The Reaping' must compete to the death in a sprawling (wooded) arena manipulated by sadistic game masters as viewed throughout Panem on live TV. Ross, with help from Collins and Billy Ray (Shattered Glass) fashion a relatively convoluted narrative that may confound some viewers (the few who weren't swept into the unspectacular, yet sharply detailed book) looking for some expository clarity.

The poor mining area from which Katniss dwells (called the Seam in what was once called Appalachia) thanks to her mother's way with herbal medicine and her own illicit hunting and gathering (with squirrels part of their diet) outside the fenced-in district isn't probably unlike the Ozarks from the aforementioned Debra Granik independent film. Selected "tributes" from her District as part of the annual sacrifice has Katniss standing in for younger sister Primrose (Willow Shields) in what virtually means a death sentence if the lone prevailer doesn't triumph back to his or her district with the spoils of battle. The expert archer is paired with a very fit baker's son Peeta (Hutcherson of The Kids Are All Right) as they tentatively bond during this gladiator-styled event. She is leaving behind another boy in her backwoods who has helped her blossom when it comes to edible plants and hunting, Gale Hawthorne (Liam Hemsworth) on the express railway to the Capitol.

Harrelson (who raised many eyebrows in those who saw him as the vicious protagonist in Rampart) is in fine form as jaded  Haymitch Abernathy the only past winner from District 12 who trains Katniss when he inebriated state isn't getting too much in the way. The garish PR lady Effie Trinket, an unrecognizable Banks, presents Katniss and Peeta as the district's "star-crossed lovers" and utters "may the odds be ever in your favor." Lenny Kravitz, who has wisely chosen many of his movie roles, again excels as the savvy stylist Cinna, while Stanley Tucci lends his scene-stealing presence as blue-pomadoured interviewer Caesar Flickman. A vivid disparity is evident from the Capitol and its residents with lavish costumes and designs.

In an expanded role from the book, Seneca Crane (Wes Bentley, who may get a boost from being in a picture like this) works the production for higher ratings like a Christof. Sutherland's wily Pres. Snow is on the prowl to keep the outlying masses docile in favor of the Capitol's smaller populated upper class (it's somewhere around the Rockies). As the perilous contest unfolds with gigantic canines as well as genetically engineered wasps, the crafty Katniss seems to have adapted well to her environment against arguably more formidable opponents represented by more nourished and financed district.

The Hunger Games may not be as dark and explosive as some readers might have hoped, yet Ross and his collaborators know how maintain a swift dramatic focus which never becomes corny, exploitative or unrealistic. There's authenticity to what holds Katniss and Peeta together as the kindly mercurial Lawrence and a sensitive Hutcherson play it out (with reticence) effectively. Even as Katniss feels closer to Peeta, the self-doubt is there when it comes to what is presented on monitors nationwide. So, the romantic tension

The production is empowered by the rapid emergence of Reality TV over the past dozen years using the premise of the oppression in a fairly shrewd, politically-minded way about the power and nature of celebrity through hope, fear, and worry as Katniss pushes the Capitol in ways that parallel what Truman Burbank did in The Truman Show (with the aforementioned character played by Ed Harris). Ross doesn't quite overall match the quality of the world-building he fashioned in Seabiscuit or the predominantly b/w Pleasantville to create a strikingly audacious allegory, but he has made a teen-friendly updated version of Logan's Run or The Running Man. Intimate, heart-pounding pleasures can be found around shaky camerawork and action trimmed for the MPAA, but if the public isn't tamed enough, the odds may easily be ever in its favor.