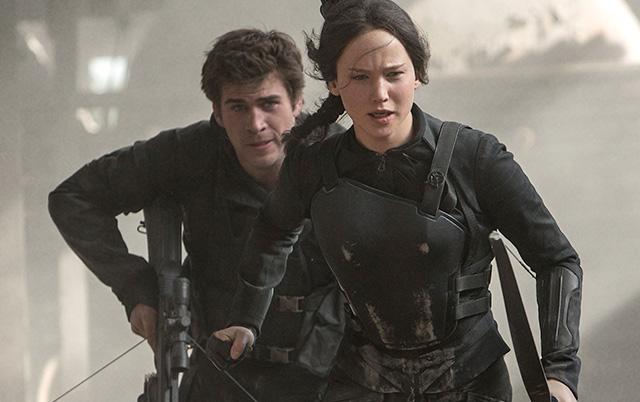 
Far less action-oriented and more ruminating as a mighty, if manufactured enterprise, a still thematically potent penultimate episode of an ultimate reality star who even sings have some important ethical underpinnings going for it, including the notion of celebrity machinations and propaganda amidst revolution.

Suzanne Collins last of three Hunger Games YA books, subtitled 'Mockingjay' shot guerrilla style under the eminent efficacy of helmer Francis Lawrence might be the most adult of an extremely lucrative series that hopefully will end like J.K. Rowling did  in the successful adaptations of Harry Potter and the Deathly Hallows in terms of shunning a complacency between good and evil to render an intensely taut and poignant conclusion.

Outside the arena, the games are just getting underway for our angry, steely, vulnerable heroine Katniss Everdeen, as Jennifer Lawrence (of the upcoming Serena and nominated last year in American Hustle which was a deft, dynamic con-artist picture) continues to be the primary reason to make being on the front lines of a dystopian civil war viable. Even without gladiatorial combat after the previous televised contests of the Hunger Games.

At the conclusion of the fruitfully sturdy Catching Fire, District 12 native Katniss has been relocated to a secret rebel lair in District 13 where its crafty Pres. Alma Coin (Julianne Moore) coaxes her to make some advertising videos to go across Panem. Along with the propos of shift Public Relations guru Plutarch Heavensbee (the late Philip Seymour Hoffman of A Most Wanted Man).

What has a Down Under intonation challenges the radical authoritarian nationalism of President Snow (a deviously smug Donald Sutherland) because of what Katniss observes in her former home, the nervous, yet artful archer is like a good Samaritan for the wounded and a governmental menace given her new bevy of incendiary arrows.

Her old, now sequestered partner from the Games and growing love interest and representative of the existing iron rule (seen to interesting effect in white with a sinister Snow) Peeta (Josh Hutcherson) pleas for Katniss to halt the violent provocation asking for a "cease fire" and admonishing district citizens on the large screens of "manipulation."

Among the standouts in the sizable cast include returnees Woody Harrelson as boozy sage Haymitch Abernathy and Stanley Tucci as flamboyant interviewer Caesar Flickman. Another back-up turn comes from Game of Thrones cast member Natalie Dormer as Cressida which will spice up some intrigue for the series' most ardent fans.

Lawrence (the director as well as the star) and the script stylishly locates the discomfort through more loquacious interludes than the two most lively set pieces that should keep some audiences alert to what might not be surprisingly thoughtful enough (if not new to the franchise altogether). The dynamic between Katniss and President Snow intensifies with Peeta's presumably thoughtful proclamation. And, poses the distressed or honorable countenance perhaps elevated or deluded by an adumbral unit maybe not too thematically dissimilar from the recent Brad Pitt war drama Fury.

This Hunger Games can be riveting enough as substantial, persuasive cinema even if it really doesn't catch fire like many waiting for the finale may anticipate, but it's likely vindicated by an acclaimed actress's fervently fraught face in the heat of a new complex battle realizing Collins's darker, grittier vision of a brave new world.