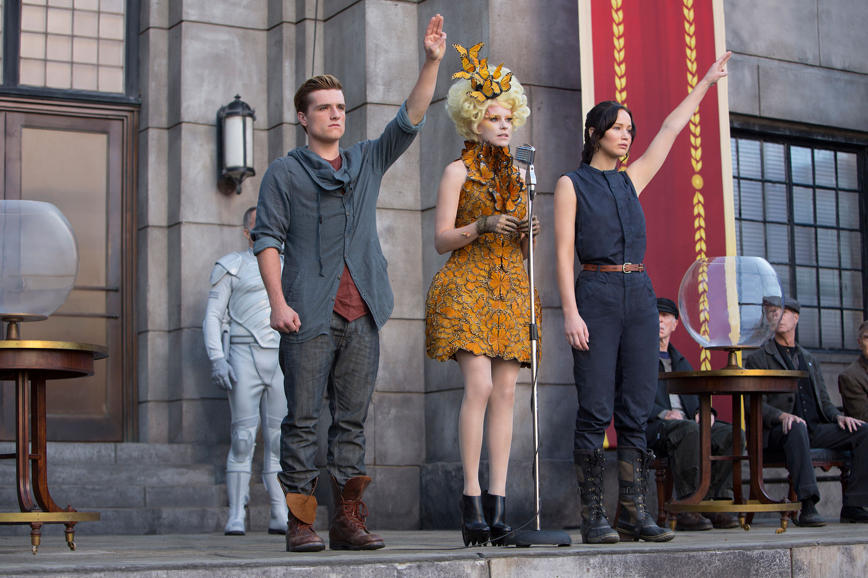 
The rare sequel that improves on its exhilarating, if not fully formed sweeping predecessor when it comes to themes and subtext is subtitled Catching Fire as director Francis Lawrence (I Am Legend) takes over for Gary Ross in seemingly getting the most out of Suzanne Collins's second and darker novel of a trilogy geared mostly to the YA crowd.

This new Hunger Games stars Jennifer Lawrence, Josh Hutcherson and Liam Hemsworth and has returning characters like Elizabeth Banks' PR maven Effie Trinkett and Stanley Tucci's flamboyant emcee Caesar Flickman. Some new additions add to the complexity and provocative nature of a rather exciting and dramatic dystopian tale built around spectacle and oppression. As former winners are pitted against new contestants.

In the 74th Hunger Games Katniss Everdeen (Lawrence, who won a Best Actress Oscar last year for Silver Linings Playbook) and Peeta (Hutcherson) of District 12 were victorious to the dismay of President Snow (Donald Sutherland). Being displayed  to the other districts' ire leads to the Capitol's malefactor to conspire with his new Gamesmaker. One named Plutarch Heavensbee evinced with arcane devilish glee by Philip Seymour Hoffman (The Master) that will put the romantically linked pair that Snow wants to uphold to the masses in more distress for the 'Quarter Quell' (75th Hunger Games). Katniss, in a rather gripping screenplay by Simon Beaufoy and Michael deBruyn, begins to lose sight of the forest for the trees, so to speak, when it comes to looking out for a caring Peeta with the help of cynical mentor Haymitch Abernathy (Woody Harrelson).

The narrative hardly bends from Collins' approach as Lawrence offers layers including compassion to Katniss's distorted vantage point while showcasing a variety of looks and outfits. From an actor's standpoint there is the ambivalence and conflict of Katniss when it comes her personal, reflective relationships with Peeta and Gale (Hemsworth who's still maybe short-shifted). But, the connections between them offer a palpable triangle.

There is growth, too, when it comes to her interplay with Snow, the long-tressed Abernathy, sister Prim (Willow Shields) and her slick designer (Lenny Kravitz). An interesting variable dynamic also exists when it comes to Katniss with new competitors Johanna and Finnick played with cunning and menace by Jena Malone and Sam Claflin. A veteran presence of thespians include Jeffrey Wright and Amanda Plummer help in this scenario to further support as Beetee and Wiress, respectively.

This stimulating, stand-alone blockbuster catches fire with distraction and details with more unsettling and vicious activities than some may expect (perhaps those most unfamiliar with the source). The set-pieces remain riveting with an ideal Lawrence filling Katniss shoes when it comes to betrayal, loyalty and justice.