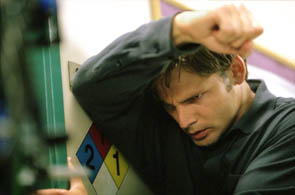 Ang Lee puts his talents to work in creatively igniting the conflict of Stan Lee's marvel Comics character Hulk.  He takes a big risk in the computer-generated monstrous transformation of a green giant that speaks with artistic and emotional power from the days of Frankenstein and King Kong.

With a cast led by Eric Bana, Jennifer Connelly, Nick Nolte and Sam Elliott, Lee's costly dalliance into special effects has much introspective into the heart and soul of its characters.

The script from a story by Lee's longtime assistant James Schamus deals evenhandedly with estrangement and repression in parent-child relationships.  The anxiety felt by the characters, from Bana's genetic researcher Bruce Banner to Connelly's understanding girlfriend Betty Ross has a similarity to some of the situations encountered in Ron Howard's A Beautiful Mind.  The effects of modification and self-experimentation is transposed expertly by Lee in making Hulk a comic-book spectacle with split-screens, wipes, and zip pans hitting on the various state of the characters.

Banner's life is set in motion by his scientist father and a military commander.  A mutation that comes from being blinded by science has been sabotaged in a way that will take Bruce (who believes himself to be orphaned) into an emotional retreat that keeps him from letting Connelly's Betty, see the real man who happens to be following his father's path in genetic research.

What's convincing after a lab accident turns rage into a huge green creature is the mind set into the realization of this mutation of his dad's gene.  The CGI-character may seem awkward in some scenes as he poses major problems for the military across the US, as well as vicious dogs and cars.  In close-ups the character is most persuasive.

Lee finally works a bold King Kong rampaging from a desert lab to San Francisco that pays off because of the time taken to show the struggles of a mad scientist, a confused son, and a woman straining to find compassion with the men in her life.  And this humanistic Hulk allows the monster within to be optimally observed from the sharp editing and scoring of Danny Elfman to the lensing which often makes a tortured comic book character a marvel to behold.