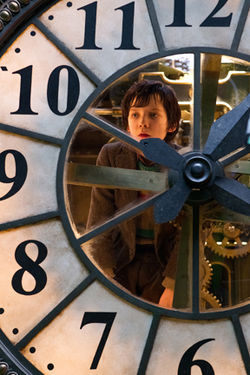 
Martin Scorsese's Hugo (from Brian Selznick's children's tome The Invention of Hugo Cabret) is a sumptuously crafted (in 3D) film that, while aimed at younger audiences, will most likely appeal to their older counterparts.

The Oscar-winner stretches himself a bit from more recent plot-driven exercises like the pristine, if elusive Shutter Island with mainly U.K. actors like Asa Butterfield, Ben Kingsley, Ray Winstone, Sacha Baron Cohen and Jude Law. Perhaps the writing from John Logan doesn't support the film's substantial length, and the filmmaking doesn't hone the wit of its antecedent all that well.

Yet, there is something to gradually behold in a story that isn't far removed from a Dickens setting. Butterfield (from the heartbreaking drama The Boy in the Striped Pajamas) is the titular orphan character dwelling in a classic Parisian rail station (post WWI) helping out with the large clocks at the strong urging of his soused uncle (Winstone). Hugo knows his way around, enough so to sneak adequate sustenance and stay a step ahead of the shadowy patrolling local constable, injured veteran of war Gustav (Cohen, not in usual comedic scene-stealing fashion) with his Doberman.

The boy's fascination with some robotic (wind-up) clockwork comes from what his deceased father (a little seen Law of the upcoming "Sherlock Holmes: A Game of Shadows") brought to the project's initial design implementation. The mysteries and action of Logan's too-slight adaptation unfold after crotchety toy shop owner known as "Pappa Georges" (a fine Kingsley) retains Hugo for his services because he's been pilfering parts to troubleshoot the automaton.

A sweet, helpful companion, though reluctant and cautious at first, for the desperate street urchin whose valued notebook is grabbed by the old man, is Isabel (rising young actress Chloe Moretz enjoying her line readings) who'll accompany him to a movie Safety Last featuring silent star Harold Lloyd. The smaller subordinating passages combine the uncle, a withdrawn Gustav and exposition on Pappa Georges and the clockwork in need of fixing.

Butterfield is okay, but doesn't resonate like he did in the aforementioned drama costarring Vera Farmiga. Besides the charisma of  Kingsley and Moretz, notable character actors like Richard Griffiths, Christopher Lee, and Emily Mortimer provide adequate backup. Scorsese also is stimulated by his first foray in the ever-popular format, but doesn't use it in any gimmicky way with the lensing prowling from the station whether in a crowd, in alleys, or on a ladder.

In its later portions Hugo is connected through a passion of cinema while it was being made into what has influenced so many that have inspired a celebrated filmmaker (with his own cameo) known for his work with Robert DeNiro, Leonardo DiCaprio, and gritty often New York City-set tales. Even as this journey will be met with some cynicism and will probably test a less patient filmgoer, it has more a captivating, enduring quality through preservation that will win over many cineastes, just like Isabel.