How to Train Your Dragon 2 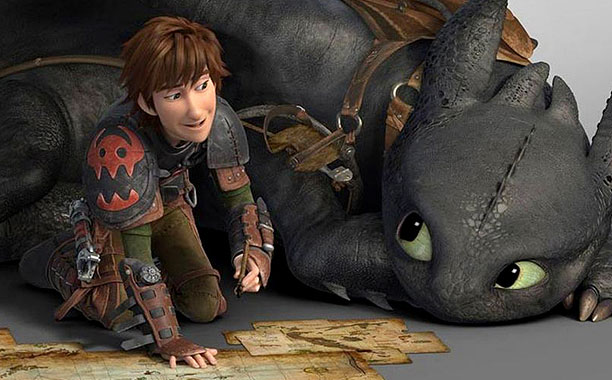 
A second installment of a weighty, influential, impeccably animated studio franchise isn't quite as pleasantly surprising or impressive as its predecessor.

Still, How To Train Your Dragon 2 is still able to ensure a fairly genuine, bracing experience having learned a thing or two from other very noteworthy, albeit darker trilogies. That will mean mega-millions to the kind of developments and gadgets on view that ingratiate the masses.

It's been five years on the Viking-inhabited Berk Island since destruction from a dragon population has waned, but Hiccup isn't that interested in what gruff father Stoick (Gerard Butler) has mentioned about the kingdom. Elements of fear and trust put this exploring dynamic duo on a course with disparate dragon tamers, Valka (Cate Blanchett) and Drago (Djimon Hounsou) with their agendas about the type of co-existence and co-dependence.

Working with ace lenser Roger Deakins and stellar composer John Powell has returning director-writer Dean DeBlois enhancing ideas around familial heritage and expectations with a hectic precision and greater stakes that fits into the mentality of the follow-up. Toothless has a winsome quality as a mute, yet adorable creation with a different affection it seems this time around. The sense over confrontation and loss is something to overcome maybe in a transformation that probably is more conventional than truly stirring.

Yet, where Hiccup and his closer companion Astrid (sweetly voiced by America Ferrera) go demonstrate a subtle touch in their adolescence and amusing vocal contributions are fashioned again by the likes of Kristen Wiig, Jonah Hill (22 Jump Street) and Craig Ferguson. Some of the revelations around the gelid locales and peril touch on matters of legacy that may not reach the high emotional points felt the first time around. But, How To Train Your Dragon 2 is heartfelt and family friendly enough even if it expeditiously strays less originally from its progenitor as its final part is already slated for release a couple of summers from now.