How to Train Your Dragon 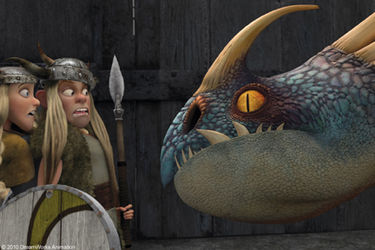 
This mischievous animated adventure has a lot going for it, not to mention that it looks so good in stereoscopic 3D, especially with the kind of excitement as it takes flight, even from a cave.

How to Train Your Dragon features the voices of Jay Baruchel, Gerard Butler, America Ferrera and TV host Craig Ferguson and certainly is a leading family attraction and crowdpleaser for the early spring movie season.

Directors Dean DeBlois and Chris Sanders use the format to wide-reaching effect in looking at how a gangly son (Baruchel) of a gruff Viking chief must ensnare a dragon to be initiated into his tribe.

The filmmakers wisely adapt the novel of the same name by Cressida Cowell first published in 2004 with a hint of early Harry Potter and their own Lilo & Stitch. The storyline, which may have the arc of this studio's own energetic Kung Fu Panda, allows for much amusement and the ability to move.

On the Isle of Berk, a sinewy Viking clan is having dragon issues as a potential pervading harrowing mood is eschewed as the early sections sportingly demonstrate.

Butler's virile, if self-effacing Stoick (a chief) leads the charge to tame these fire-breathing terrorizing pests. But, his agreeable clan outsider/misfit of son, Hiccup (Baruchel, who personalizes this character even more agreeably than in the current raunchy knockoff of a date movie She's Out of My League), believes that these fearsome creatures aren't as bad as Vikings make them out to be .

Steering from being fractured or derisive, the film sincerely takes hold as Hiccup clandestinely befriends a member of the shadowy "Night Fury" breed after he makes a slingshot-styled device used for capture. Hiccup calls his new companion "Toothless" as familiar narrative elements are made more appealing, even than the studio's own recent Monsters vs. Aliens. At the same time, he has grown a fondness for Ferrera's spunky, empowered Astrid, who could be a cousin of the title character in the concurrent Alice in Wonderland.

The welcome relationship of Hiccup and Toothless puts into perspective familial issues the former has with an unbeknownst father expecting more of him while attends dragon-training sessions. DeBlois and Sanders embrace the DNA of the genre and its visual possibilities to give it the brawn and sensibility it needs to overcome any predictability. Some of the subordinate folks on view are voiced with some verve by actors like Kristen Wiig, (Judd Apatow favorite) Jonah Hill, Christopher Mintz-Plasse (McLovin), and T.J. Miller. It seems that the adults, like the wry bluster from Ferguson, have thicker accents than their younger counterparts.

This schematic of an origin tale of an unruly dynamic is imaginatively fleshed out to augment the story and action with depth invited in this format. As one comes to learn about Toothless with eclectic creature designing by Nico Marlet, plenty of scenes which have angled in many are further illuminated complement of the live-action knowhow from visual consultant Roger Deakins. This Dragon incorporates a Viking reality as the imagery of purple streaks, torches and bonfires that is virtually breathtaking and hard to resist.