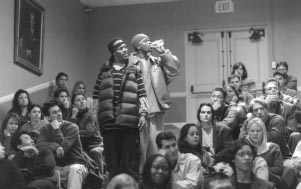 This holiday season Hollywood has a little something for everyone, even a goofy, if intermittently wry comedy for stoners in How High.

It's definitely a little more high-minded than the soapy recycled scenery of The Wash.  And here, rappers Method Man and Redman generate more appeal than Snoop Dogg and Dr. Dre did.

For some it may be amusing that these two Staten Island "hopheads" are interested in college and want to pass the THC test not SAT.  Prior to the testing, Silas played by Method Man, and his best friend Ivory (Chuck Davis) are getting high.  But Ivory happens to catch his hair on fire with a marijuana but and falls out of a window into the path of a bus.

Silas has a botanical sense and uses the mourning process for a chance to spruce up some of his cannabis with Ivory's ashes.  After lighting up an Ivory doobie, How High entertains the supernatural presence of his long-gone intelligent friend.  He provides the means for Silas and Redman's Jamal to pass the Testing for Higher Credentials with flying colors.

The amazing THC scores have Silas and Jamal receiving offers from universities all over, but Harvard is the one for them.  That's because the funky chancellor, played by Fred Willard (Best in Show), says in their rap lingo that the booty on campus is ripe for the picking.

There appears to be some potential through Silas' interactions with a student (Lark Voorhimes of "Saved By the Bell") who is into an archaeological project concerning new findings formerly of Ben Franklin.  And Jamal has his sights set on the daughter of the black Vice President (Essence Atkins).  But nothing humorous or substantial arises out of it and a sassy pimp with baby powder has more significance out of Jesse Dylan's slapdash direction.

How High even runs out of ideas as the ending indicates that Dylan may have thought that it was long enough.  This low-budgeteer in collegiate haze probably wasn't as half-baked in the developmental stage than it looks in the end with some deep meanings from a peculiar sort done by Al Shearer.  Maybe Dylan (son of music legend Bob) knew only a mild high could be reached from an uncultivated tale with sight gags that work best after being up in smoke.