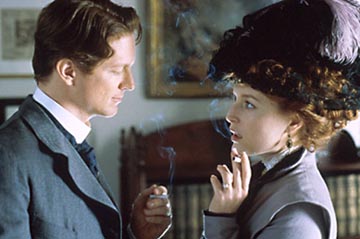 The House of Mirth

Terence Davies uses the subtle power of Gillian Anderson to make the deliberate Edith Wharton 1905 tome come alive in a heartfelt look at sex and greed in the Big Apple.

Davies pulls no punches in displaying a ruthless upper class which can be cruel to Anderson's Lily Bart, a kind yet rebellious and worldly social lady who aspires for the high life, provided for on a small stipend by her conservative minded aunt (Eleanor Bron).

Anderson transports herself through the evocative direction of Davies which demonstrates how far she can take herself from her dutiful agent Scully on the X-Files.  The deeply admired Lily has affections for a legal man, Eric Stoltz's Lawrence Seldon who says "You're such a wonderful spectacle."  But he isn't the wealthy man who can insure social solvency and being unmarried at her age, this willful woman could be dragged down as a societal outcast.

The portrayal of the placid existence in defying the chance that opportunity invites accentuates the clandestine maneuverings amid the luxuriant costumes and furniture which resonate with the detailed look of a forgotten era.

As Lily discovers the anguish beneath her decorative facade, Davies backs Anderson with Dan Aykroyd's shifty financier, a searing Laura Linney whose Bertha treats the social climber with much hostility, and Anthony LePaglia's truthful shading into a wealthy Jew feeling the unnerving pulse from the nouveau riche.

But it's Anderson who makes this uncompromising self-awareness on the part of Lily something that stings with a quiet intensity in a transformation that Davies eloquently produces from The House of Mirth, a slow but enveloping ode to the vicious circle of high society.