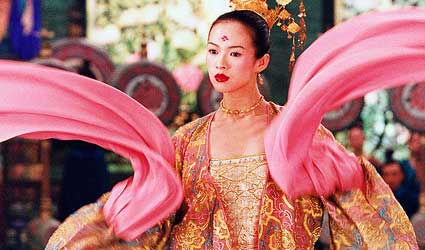 Zhang Yimou moves from the feudal kingdoms in the 3rd Century B.C. in Hero to the Tang Dynasty in 859 A.D. in the gorgeous martial-arts epic House of Flying Daggers (in Mandarin with English subtitles).

While there probably won’t be as large an audience coming out for this one as the dazzling Hero, the stunts and imagery produce poetry in motion with outstanding sound-effects editing.

She's introduced as Mei, a blind courtesan who is a top dancer in a brothel for a madam called Nina. A police captain, Leo (Andy Lau), believes Mei to be a member of a dangerous faction called the House of Flying Daggers trying to usurp a corrupt government. He pretends to be a drunken patron to get her. The investigation surrounds reports of the former insurgent leader’s daughter posing as the new showgirl.

One of the scintillating set pieces in an exquisite production design is a complex dance called the Echo Game. Leo fires rocks at a series of drums and Mei must replicate his movements by flinging dried beans using her hands, feet, and sashes on her lovely costume.

Mei will escape a torturous demise in prison with the help of a blue garmented warrior called Wind (Takeshi Kaneshiro). She doesn’t know that Wind is actually undercover in cahoots with Leo and is actually Jin.

Yimou works splendidly with his director of photography throughout, especially in a bamboo forest where we look up to see lots of warriors descending upon Mei and Jin with a barrage of bamboo spears from the treetops. But, blazing daggers end up saving the two of them who will get more intimate well after Mei is watched by Jin as she bathes.

The characterizations are a part of a triangle that will emerge once Leo returns to be released in a forest where much explanation is given. And, Mei will disclose that Leo was her lover before a separation three years earlier.

House of Flying Daggers proceeds with pinpoint delicacy with Mei having a surprise for her new lover as it almost has overtones of Shakespear. If you are riveted to the sumptuous, kinetic duels in Hero, then there’s an exciting climax in an autumnal forest that abruptly turns wintry. Kaneshiro puts romantic underpinnings into his dividend Jin, and Lau adds a fierce psychological dimension to a composed police captain.

The piercing special effects are brought on by the daggers which Mei wields, but this stylish visual feast cuts to the heart from the determination of a gifted youthful actress like Ziyi.