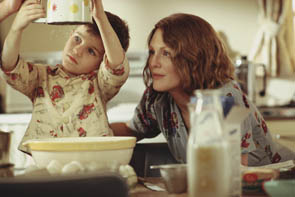 There won't be a better screen play this year than The Hours.  Draped around the script we find strong performances by women who relate to other women more easily than the men in their lives.

Across the 20th century and into the 21st their lives intertwine as the three stories are told simultaneously - almost in parallel.  In 1923 England Nicole Kidman's Virgnia Woolf suffers internally as she writes "Mrs. Dalloway."  Her husband has moved her from London to the country in an attempt to cure her tense mind and keep her from suicide.  She appears to have only one happy moment when she kisses Vanessa Bell (Miranda Richardson).

In 1951 Julianne Moore's Laura Brown shows obvious signs of instability as she reads Woolf's "Mrs. Dalloway."  Her mental pain leads her to contemplate suicide and her very observant son understands much more than she believes.  His large dark eyes absorb everything that passes including her warm kiss with Toni Collette's Kitty.

The deep connection between the three women only comes to light at a climatic point late in the film.

The Hours are referred to by Ed Harris as the time between his limited activities which pass very slowly.  The film suffers from slow periods from director Stephen Daldry (Billy Elliot) but the gifted script punches it back up particularly as each life is resolved.

Julianne Moore appears stuck in the 50ies this year as her Far From Heaven and The Hours place her in the second half century decade.  Her work in both is incredible; here we can feel her instability as she fails to effectively bake a cake for her husband's birthday and she finds dangerous alternatives for her life in "Mrs. Dalloway".

Kidman's makeup fools us even when we know she is beautiful under the make up.  We are sure she is a plane non-attractive dowdy woman.

Streep is effective as usual but her part is more of a conduit and her scenes are less apt to grab us emotionally.  The supportive staff couldn't be better.  Ed Harris, Tony Collette and Allison Janney are splendid to watch.  But Clair Danes as Streep's daughter Julia is delightful as she breaths life into the dark world of Clarissa Vaughan and brings youthful hope into the story when it needs it most. She is the balanced positive future in contrast to the three women who are unsure of their lives.

The sets in the early century English countryside are lush and filled with pastoral scenes which usually bring calm.  The 50ies scenes are retro spectacular; Laura Brown's street looks like an ad for a California home development.  Her kitchen in dark yellow wood and even the hand flower sifter bring us back in time.

Tighter direction for The Hours could have made it extraordinary, but even with its limitations the performances and the gifted script leave us with an image of a classic beautiful film.