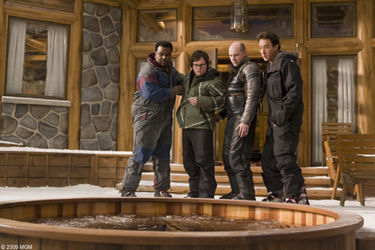 
As one character says in this new John Cusack starrer and film by High Fidelity and Grosse Pointe Blank buddy/writer Steve Pink, "embrace the chaos."

Hot Tub Time Machine stars Cusack (here, a producer), Rob Corddry, Craig Robinson and Clark Duke, and will appeal to spring breakers and fans of films like The Hangover and I Love You, Man in its uncouth, unrefined way.

It centers on three longtime buddies, Cusack's Adam, Corddry's Lou, Robinson's Nick and Duke's Jacob, Adam's young "adult" nephew who lives in his uncle's basement. From the opening sequences, some viewers may be trapped in a vapid vortex of dysfunctionality, but eventually are drawn into a zany celebration of friendship. Though, without being as well-appointed as something as last summer's aforementioned smash hit.

The crux of this pervasive prurience is the foursome having a blast from the past while revisiting and getting smashed at a ski resort that the older three once spent time in back in 1986. A Russian Red Bull beverage, one Chernobyl-ly, makes their magically rejuvenated hot tub put them into Winterfest over a weekend during a decade that those like Adam especially despised.

This dirty, diagrammed piece especially for Gen-X folks places importance on repeating what was done during a time that hot bands like Poison played in order to make it back to present time. Of course, some events will be tinkered with, especially by Adam, as the outcomes need to be reach for continuity and truth. So, viewers will have some gut-wrenching laughs at the expense of what Adam, Lou, and Nick, as well as the awkward Jake are going through.

Cusack (probably a welcome change-up after 2012) and Duke (good in the wild Sex Drive) serve more as straight men as Robinson (Pineapple Express) and, especially, Corddry embrace the film's fraternity-minded nature, which might be too low-minded for those not into what has a good sense of humor about itself.

Pink and Cusack wittily infuse the zeitgeist of the times from "Alf" to leg-warmers and Michael Jackson, as it's clear the latter doesn't mind self-parody as one of the many cinematic references includes his winning Better Off Dead. That's not including the Cold War influence of White Nights and Red Dawn, as well as Sixteen Candles, Pretty in Pink, and the best one being Back to the Future which the filmmakers "kick some past" into.

Obviously, there isn't the precision and genuine fun here of the Michael J. Fox / Christopher Lloyd adventure / comedy, but it has Crispin Glover in fine form as the older/young versions of his bellhop character. One waits for something bad to happen to his Good Samaritan as Cusack's Adam starts up a relationship with a journalist (Lizzy Caplan of the queasy-framed horror hit Cloverfield). Chevy Chase, who was hot in this time frame with films like Fletch and even the little recalled Modern Problems is more of a plot device as a repairman at the resort.

Essentially, Hot Tub Time Machine revels in its rude imperfections as an unlikely upshot to all the derring-do is on the horizon with a scene of female nudity and more drug use than need be. Yes, it probably knows that there's some skewering of the culture of that period of Max Headroom when it comes to at least one person's age (who's a part of the film's major revelation), and those who know what was Johnny Depp's small-screen stepping stone as well as the AFC Championship Game that featured "The Drive." Yet, this capricious, crude cinematic playland is "home sweet home", notably when an infidelity-mined Nick gets "this party started" and Adam and Jake eavesdropping on Lou who ironically loves Motley Crue and Google.