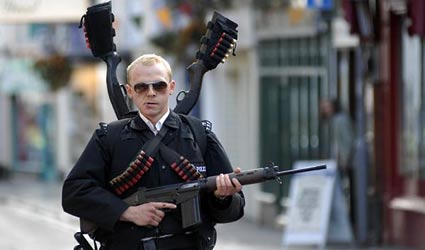 
A send-up of the cop genre is more than par for the course for Edgar Wright and Simon Pegg, those zany creators of the cult hit, Shaun of the Dead. Hot Fuzz does it with little winking and smiling.

Director Wright (also helming one of the "Coming Attractions" in Grindhouse) and star and co-writer Peg, featured in Shaun, have again fashioned humorous escapism. This time, not a romantic zombie comedy.

Pegg is one of London's finest as Nicholas Angel, but the higher-ups want the very efficient, gung-ho officer out. So, he's transferred to a quiet, dreary hamlet where his new bumbling, butterball of a partner (Nick Frost, also of Shaun) is the son of the the chief, a fine Jim Broadbent. The chief likes everything in order with the simplicity of the neighborhood watch and a dog.

The relocation seems too jejune for Angel, but the living, not the dead, in the village appear to be up to something, beyond excessive eavesdropping. Fatalities that pop up seem to cross the threshold of coincidence. As Angel gets his crime-fighting juices flowing again, the primary suspect is a supercilious grocery store owner (Timothy Dalton). However, establishing a solid case may be tough for this adroit cop.

This police thriller, with Wright scripting with Pegg, mines suble wryness, albeit in a dry way through parody, as excess from the production and deadpan characterizations whip up an enjoyable, if protracted pastiche.

With the citing of the likes of "Bad Boys", the cliches are embraced by cast and crew with those slowed-up shootouts and huge explosions. Pegg is more than agreeable as the nerdy, yet steely supercop, whose understated nature add to comedic effect. His pairing with the oddly appealing Frost also makes Hot Fuzz a goofy buddy picture.