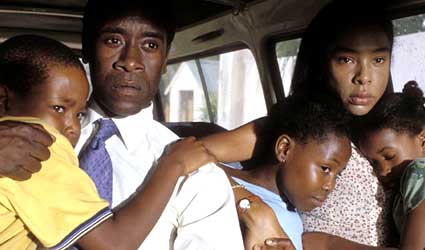 This riveting tale of courage and humanity amid brutality from Terry George was the winner of the 2004 People’s Choice Award at the Toronto Film Festival.

George, who wrote the screenplay with Keir Pearson, chronicles this true 1994 setting of a Schindler’s List like story about Rusesabagina running a four-star Began hotel. He knows how the "system" works to appease those in the black market and the military. His life with his wife (a touching Sophie Okonedo of Dirty Pretty Things) and children is pleasant until a nationalist Hutu group plans to rebel against the controlling Tutsis. Paul assumes that it is some dispute over antiquated colonial issues.

Soon, one is authentically and intimately caught up in the genocide and revolution outbreak and how Paul responds to it with a calmness to use his hotel to harbor over 1200 people against all odds.

Part of the impact of Hotel Rwanda comes from how the atrocities developed from Paul’s unfiltered, dignified perspective. Some of the westerners he comes into contact with include a UN cameraman well-played by Nick Nolte as that world organization is gradually shown in a weak light. Cara Seymour (Adaptation) is informative as a Red Cross worker; Jean Reno is good as a European businessman, and Joaquim Phoenix (Ladder 49) puts some wistfulness into a reporting cameraman.

Like the hard-working Paul Giamatti, Cheadle is pitch-perfect in a well deserved leading part. There is nothing antiseptic about the humor and charisma he invests in a man who senses the increasing tension in the Rwandan society and on the streets. He is the glue to a gripping story and a deeply sympathetic character who puts everything on the line for his family and so many more souls.

Even if George doesn’t stage all of the drama which horrifically cost millions of lives and exiled even more refugees with a gritty verisimilitude, the character interaction and western isolationism cries out with abandonment and the cool, unselfish portrait by Cheadle makes the relatively unknown Rusesabagina worthy of a more than passing heroic mention in history books.