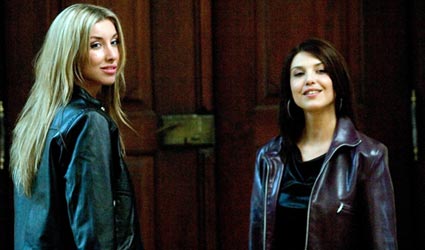 That said, Hostel definitely has a doubly, harsh meaning, and the backing of Quentin Tarantino, who presents this malignant, torturous debacle. Roth showed promise with Cabin Fever, and, with Tarantino, goes more twisted here as a Thai website is the basis for something "inspired by true events."

For a while, a backpacking trip through Europe offers hedonism that could be easily observed as soft-porn. Jay Hernandez is the most recognizable actor to U.S. audiences as Paxton, and his buddies are Josh (Derek Richardson) and Icelandic wildman Oli (Eythor Gudjonsson). Testing the limits of pot-smoking in Amsterdam, they are welcomed by a local (Lubomir Bukovy) after reaching their hostel well past curfew. He gets them on their way to Eastern Europe's Bratislava, a paradise for backpackers looking to score with svelte beauties.

A posh inn happens to have reservations in Oli's name, and Natalya (Barbara Nedeljakova) and Svetlana (Jana Kaderabkova) are primed to provide orgiastic fun. After a nighttime romp, Oli will end up missing the next morning. And, Josh will end up in a dungeon as Hostel makes for wicked doings based on "citizens" involved in a lucrative business. What a brave viewer will witness with a drill, scalpel, even a blow-torch, is gore done with a vengeance that ultimately has Paxton deep in a slasher's adrenaline rush.

As brutal as all of this turns out to be, the make-up is grimly convincing, an example of the picture's increasingly chophouse grinding effect. Roth isn't interested in getting one into the characters probably as much as recognizing the appetite for mordant gratuituous behavior. Penetration has its greatest visceral release when it concerns the eye and the achilles tendon, and this lurid, sanguine filmic experience should sate the most perverse, masochistic fans of dismemberment out there.