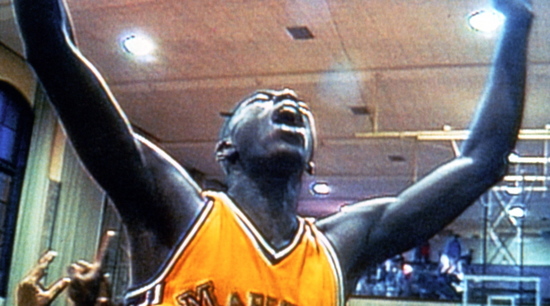 
Hoop Dreams is a true story documenting the lives of two extraordinarily talented inner city high schoolers -- William Gates and Arthur Agree -- who aspire to NBA greatness. Set in Chicago, the film examines the culture of "street basketball" on the city's playground courts. The boys' faith in the game of basketball unites their families.

Filmmakers Steve James, Frederick Marx and Peter Gilbert originally set out to make a short film but were encouraged by Gordon Quinn of Kartemquin Films to realized their vision of making a full-length feature film. They have succeeded in chronicling the important milestones occurring in the lives of William Gates and Arthur Agee over the course of five years (from age 14 to age 19).

The filmmakers share a love of basketball and a history of participating in the sport. With Hoop Dreams they have created the firs major film to explore kids, sports and education at the high school level.

The film dramatically illustrates the ability of basketball excellence to expand the educational opportunities for inner-city youth. At the same time, the viewer witnesses the exploitation of talent and the single mindedness of coaches and recruiters whose interest in the young men rarely extends beyond the basketball court.