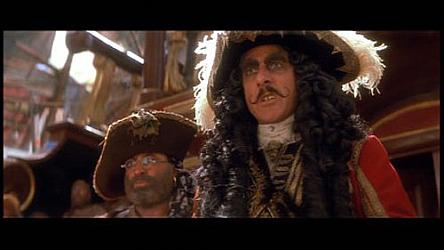 
James M. Barrie's Peter Pan has been reworked by Steven Spielberg so that Peter (Robin Williams) is grown up with a wife, a son (Charlie Korsmo) and daughter (Amber WScott). He's absorbed by his work as a lawyer, taking business calls on his cellular phone during his daughter's school play and missing his son's little league games.

On a family trip to England to visit Grandma Wendy Darling (Maggie Smith), Captain Hook (Dustin Hoffman) kidnaps the kids, leaving a note enticing Peter to come and fight for them. Peter, who has no memory of his youth, has to be carried off, wrapped in a blanket by Tinker Bell, to Never Never Land. Tinker Bell is played by a lackluster Julia Roberts, sporting bright red cropped hair.

Hook and his pirate gang are gearing up for a big war against Peter and lost Boys by, when Peter shows up, they don't believe it's really him. He's overweight, can't fight and worst of all, he's afraid of heights. With Tinker Bell's urging, Peter's given three days to get into fighting shape.

The simplicity of Grandma Darling's home with shadows moving across vaulted ceilings and night lights flickering in the corners of the nursery sets the tone for a warm, imaginative story. But once in Never Never Land, Spielberg inundates the audience with overproduction. Hook's pirate ship and the Lost Boys' hideout are jam packed with people, scenery and props. Certainly not easy on the eyes.

The illustrious cast does a good job. Hoffman in a mile-long, curly black wig and "Snidely Whiplash" mustache is devilishly evil, and Williams is in good form once he remembers how to be a child again. Roberts is miscast as Tink, she isn't playful of feisty enough.

Maybe more is expected of a Spielberg movie. He stretches your imagination; however, the "wonder" is missing. Hook is uneven, but pleasant enough.